So as part of the consolidation work on the the block wiring I needed to redesign the JMRI Panel Pro - Panel.  The existing layout panel was fairly cluttered and wasn't really going to work well.

Now that installation of all 28 blocks to the centre peninsula BDL are just about complete I spent the last two nights and a few hours yesterday redoing the panel.  There were several issues that needed to be ironed out, and I also wanted to add town names and mile post markers too.

The new panel flows much better is easier to understand and visually works well and I'm happy with it.  It still needs a few things added like the actual signal masts & dwarfs along with some more labels. 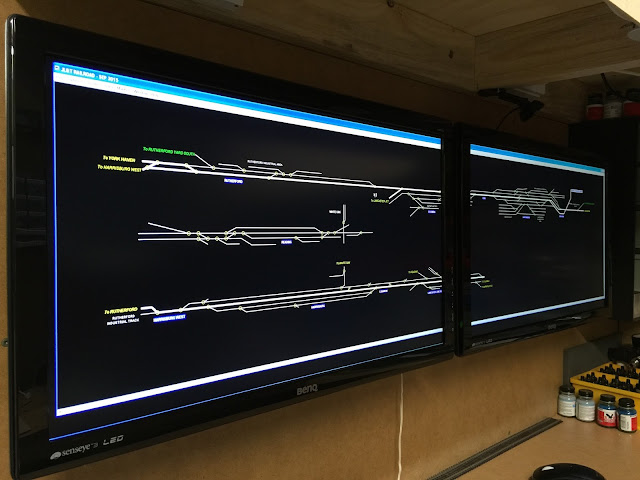 I have to do some tweaking to the section split between the two screens so that it basically just straight track and its ready for ops.

So yesterday sore another day of finishing up the detection & block wiring for the centre peninsula.  At this stage there are another 5 - 6 blocks to be wired back to the BDL168 and its completed. 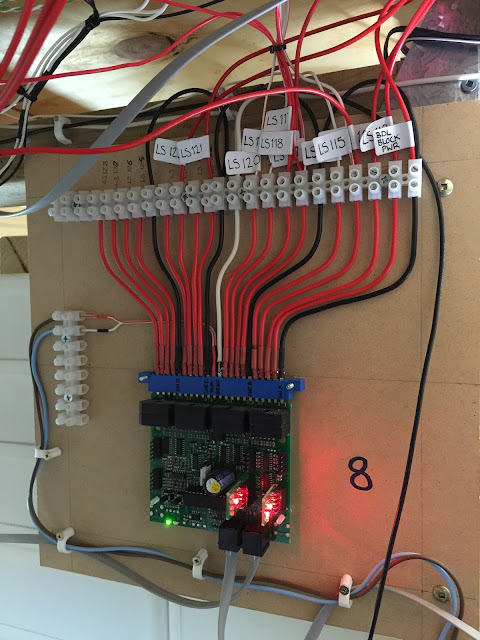 In the photo above & below you can see the naming convention that I've adopted, so as I install the block power feeds to the BDL they each get labelled once checked and operating correctly.  The "LS" is a Digitrax naming convention for a block, as can be seen the Digitrax LT5 block testers are attached to the A & B zones and are detecting the four blocks associated with each zone. 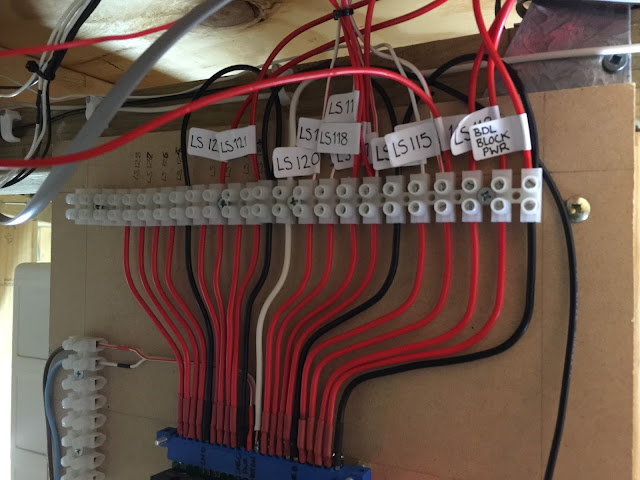 Another solution that I needed to overcome was the common wire return, I wanted to use a brass or copper bus bar for this but couldn't find one locally.  I didn't want to use the screwed type block connecters so instead adopted a PCB type block bar and fitted it to a small plastic junction box. 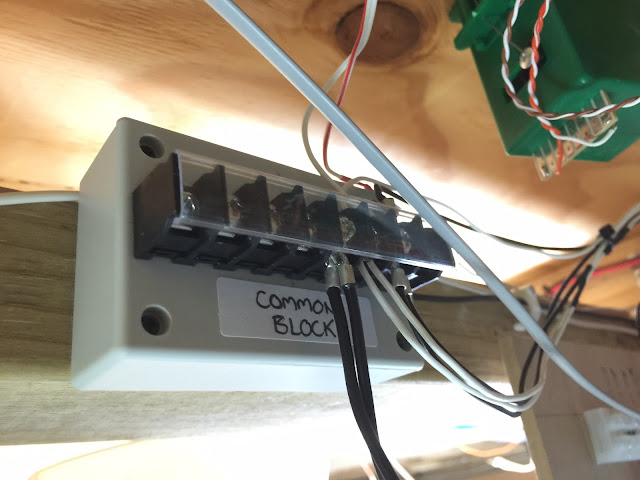 It is much easier making multiple connections this way than the previous version I was using.  This method makes the removal and/or addition much easier.  As you can see in the below photo the feeder wires are also labelled with the block that is powering them too.
This should make fault finding or changes a lot easier in the future. 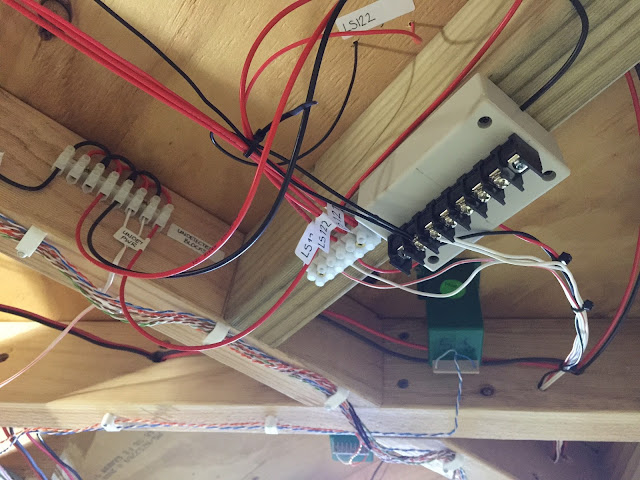 In the above shot you can also see one of the "undetected" block buses too.  These are for powering any section of track (usually small sidings & spurs) that are not detected via the BDL168.

Posted by JLandT Railroad at 16:07 No comments:

You know your doing blocks, turnouts & signals when your layout looks like this...

One of the critical tasks when installing a detection & signaling system is to record all of your blocks, turnouts & signal masts.  Luckily I have few people who have tread this path before and have helped out with some great advice and spreadsheets to record it all.

Today was a consolidation day of ensuring that I had all the blocks in the right place, the insulators in the right positions and all the turnouts that are going to be individual blocks both wired and isolated too.

So to start I printed off the spread sheets for the BDL168's and got several packets of white stick on labels.  Special thanks has to go to Brendan Dennis who designed these sheets in Excel and has shared them with us, they contain sheets for the BDL168, SE8C & Signal Heads/Masts. 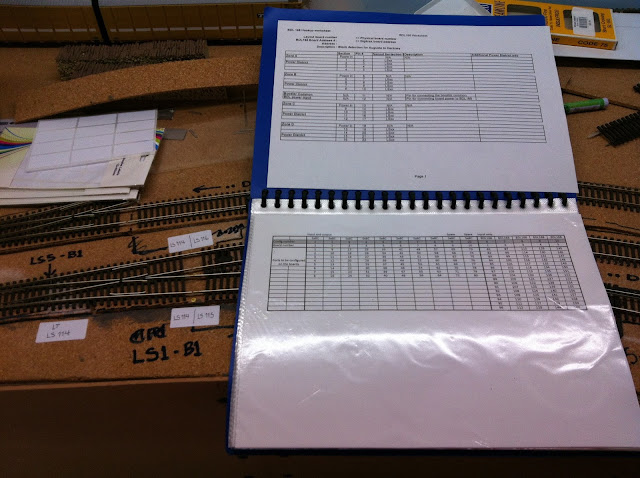 The labelling convention that I am using is to place a label sticker on the boundary between blocks and label both sides with the common JMRI/Digitrax naming/address convention.  For blocks it is LS & for Turnouts (Switch Machines) it is LT.

In the photo above you can see the RH turnout labelled LS114 on the approach, straight through & diverging routes.  It also has a sticker in the middle for the turnout address and to signify that it is a detected block. 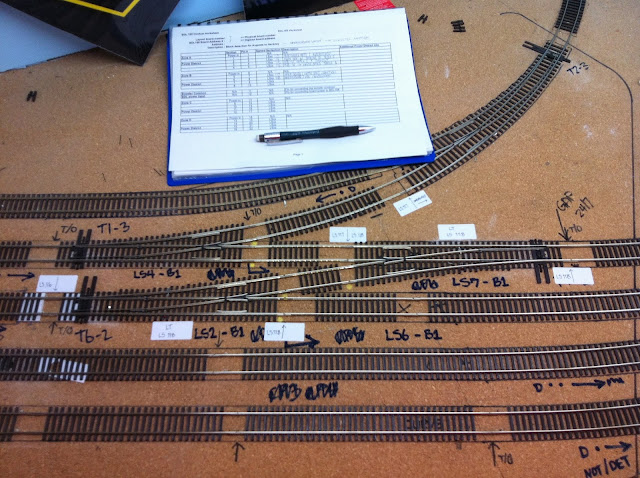 Here is the junction a Harrisburg leading off to White Oak, and as you can see the crossover is it's own detected block, incorporating two turnouts.  Any track leaving a detected section or turnout that is not going to be detected via JMRI is labelled as either "undetected" or U/D.

This should make wiring the blocks underneath the layout and for fault finding later much easier.

So yesterday was a full day on the layout, and the progression of the detection wiring needed to be progressed yet again.  Its amazing how much is involved once you actually get going and start doing instead of planning...

One of the future proofing items that needed addressing was the powering of all of the mainline & detected track turnouts.  Not really a big tack in respect to the wiring of them, but a big task in pulling them out of the already installed track work. 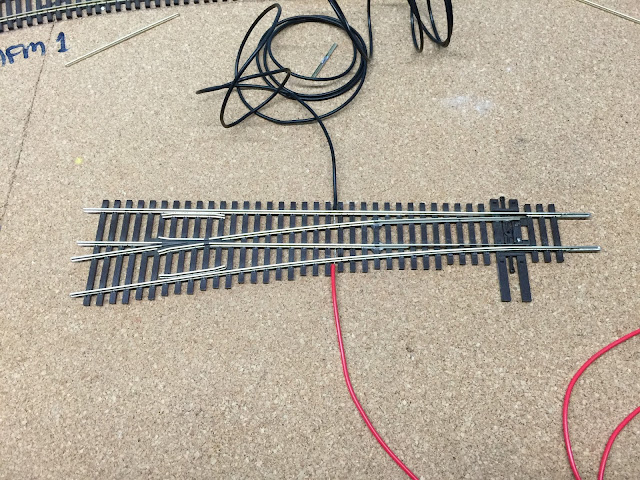 Seeing that 95% of all of track & turnouts are PECO Code83 its actually quite easy.  There are two reasons for actually doing this, the first is I have decided that each turnout will be its own detected block.  This way when a caboose or locomotive is blocking either the straight through or diverging route it will show on the panel.  This saves an entire section of a block from being show as occupied when it may only be the turnout itself.

The other flip side is it makes the PECO turnouts virtually bullet proof.  The "Insufrog" range I use feeds power to the turnout via the point end on the point rails, if they become dirty or don't quite make contact with the stock rail it will give a poor power supply.

To overcome this I have wired power to corresponding stock rail and point rail, this ensures that the turnout always power, and if isolated for detection purposes for signaling it can be powered through a Digitrax BDL 168 as a separate block.

Its pretty simple and quick to wire them up... 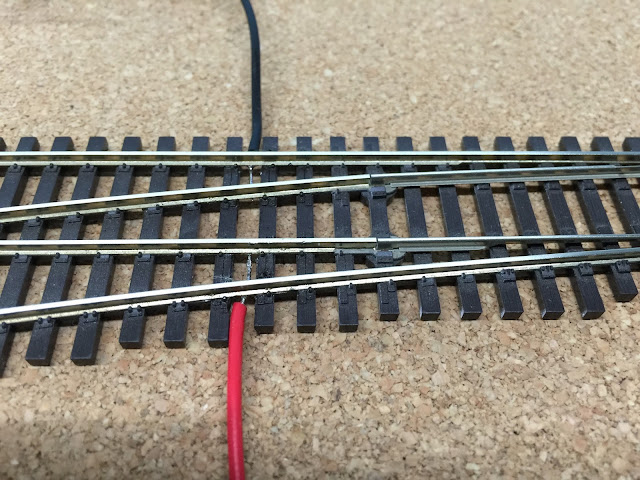 The gaps are already there from the PECO factory, you just have to be careful with the heat time not melting the plastic, I use a pencil soldering iron. 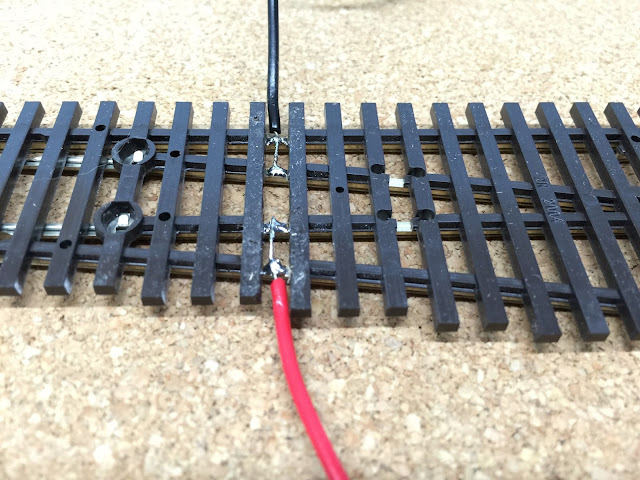 Thursday Theatre on the JL&T...

On a sunny day the afternoon shift and local MOW crew, in the Reading/White Oak Interlocking Tower are being entertained by their very own carpark version of C.O.P.S, 1973 style. 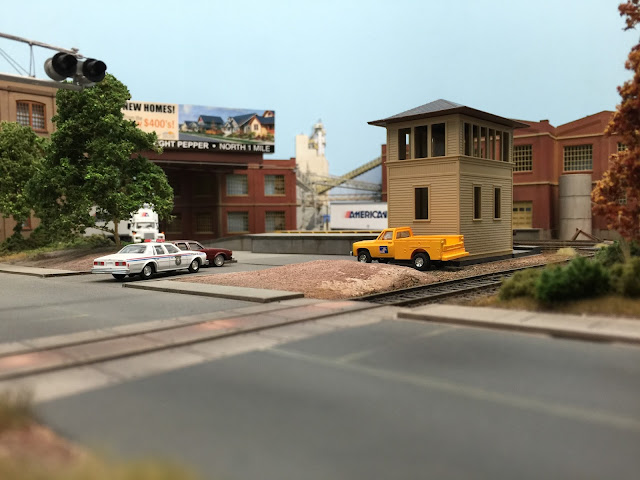 The local RMP has pulled over a dodgy looking vehicle and is running their details through
SCMODS (Blues Brothers joke!)...
Posted by JLandT Railroad at 23:24 No comments: