Here is a quick video of the recent install of a ESU - LokSound - Select Direct sound decoder with an ESU Sugar Cube speaker (50321).

The sound is a little loud due the closeness of the iPhone to the locomotive.  It highlights the manual notching of the decoder and the uploaded LokSound EMD 567 sound file.

Next stage will be to play around with the LokProgrammer and get all the settings & sounds right too...

As part of the recent upgrade to the LokSound - Select Direct decoders I also wanted to upgrade the bulb lights in the Athearn RTR - RDG GP35. 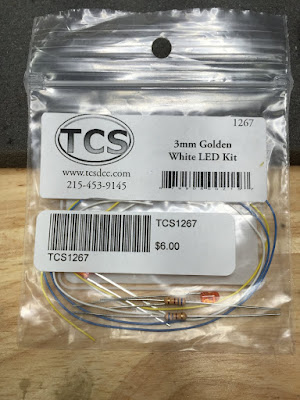 The installation is fairly easy and can be done in about 30 minutes to an hour.  First step is to drill out the holes on the cab for the lights.

The Athearn headlights are slightly bigger than holes for the bulbs, I drill these out with a small thumb drill and ensure the plastic headlights fit.  On this RTR GP35 I had to also drill out the opening in the cab to get the LED through the cabin plastic at the back of the number boards.

Once the fit is right I file down the Golden White LED. 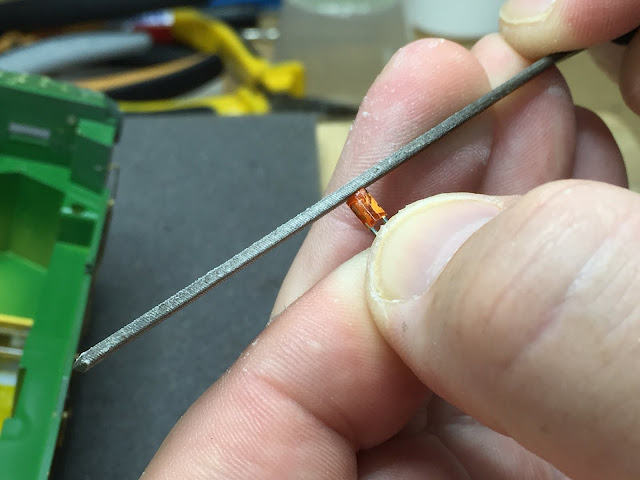 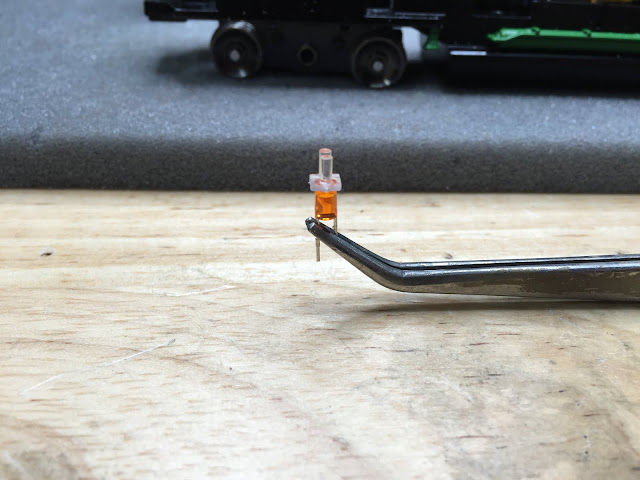 Once the CA is cured I place a small piece of heat shrink over the leads.  This stops any shorts and also blocks out any light from the cabin interior. 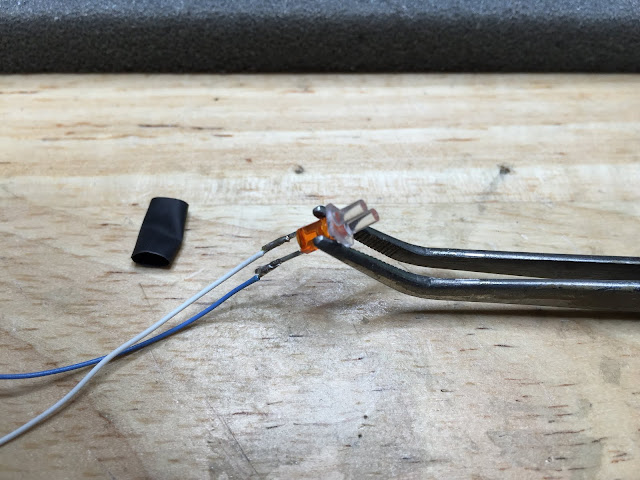 I then fit the LED and lenses into the cab and secure with a piece of Kapton tape. 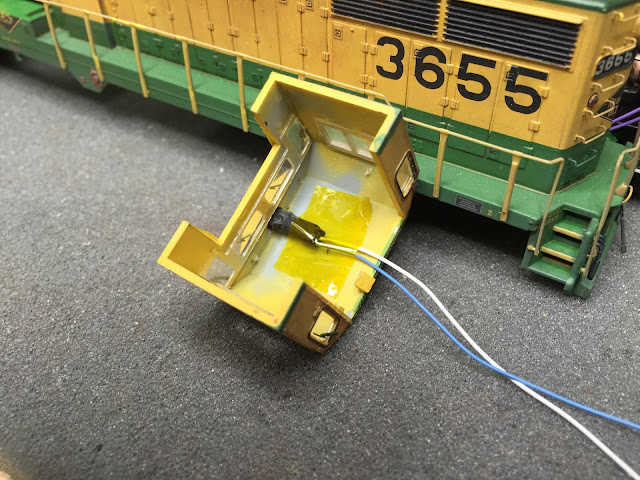 Then test the LED before replacing the cab shell onto the body shell. 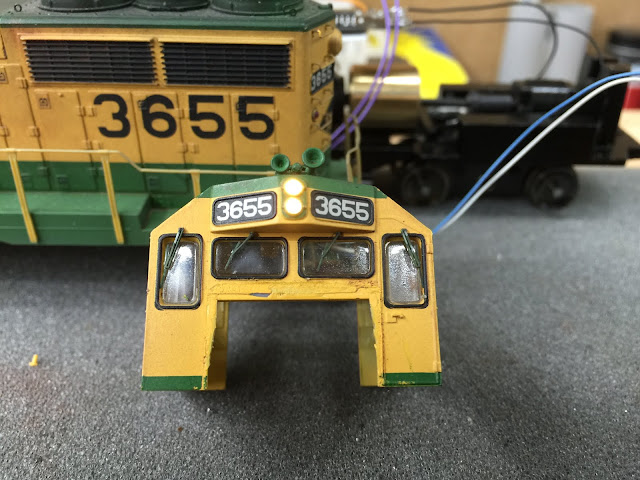 The Golden White LED gives of the perfect colour for locomotive headlights.  Be aware though that when using a LokSound - Select Direct decoder like I have you do not require resistors in line as they are installed on the decoder.  If you are using anything else ensure you check if resistors are required.
Posted by JLandT Railroad at 21:51 2 comments:

To have a little break from the layout build I decided to start installing my two
ESU - LokSound - Select Direct decoders.

I originally got these to go into my new Athearn - Genesis RDG GP39-2 locomotives.  I was however a little hesitant to attack two brand new locomotives before trying it on something a little less expensive.

So as a start I have upgraded an Athearn RTR - RDG GP35 & Atlas Silver Series - GP40-2. The Athearn RTR GP35 had already been weathered but I wanted to upgrade the truck power pick ups, replace the Athearn bulbs with LED's and give the motor a good service. 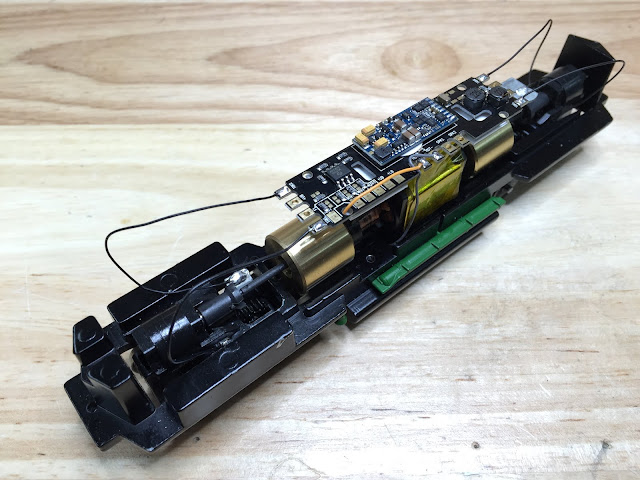 This unit will have one of ESU's Sugar Cube speakers (50321) which is a 15mm x 11mm 8Ohm speaker.  The photo below shows the temporary location for the speaker, it will eventually be stuck inside the shell towards the rear series of fans. 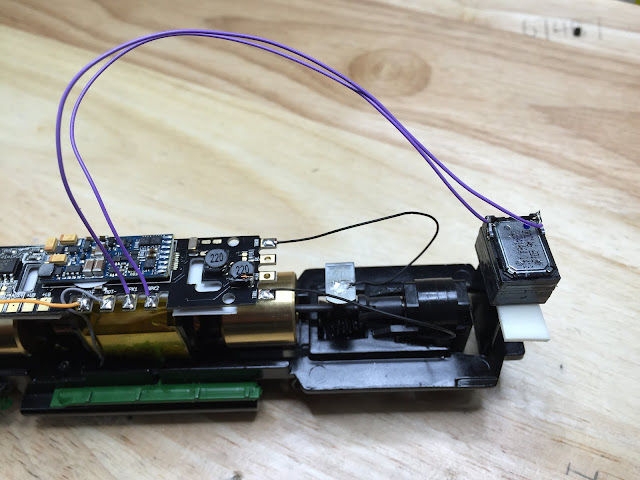 The second unit being the Atlas Silver Series - GP40-2 was a straight forward change out.  After doing the Athearn first which required a few fixes and servicing the Atlas was a easy changeover.  It took around two hours even though I had to cut out sections of the weights and OEM speaker enclosure too. 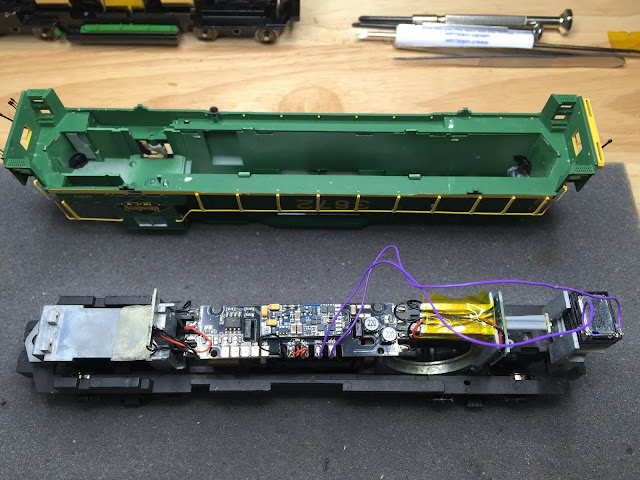 The Atlas already comes with LED's so the installation of the board and wires was a 30min job.  The only modifications required was to trim down the decoder lugs a little to get the decoder to sit down straight above the motor.

I also had to remove a small section of the Atlas speaker frame to get the decoder into place. 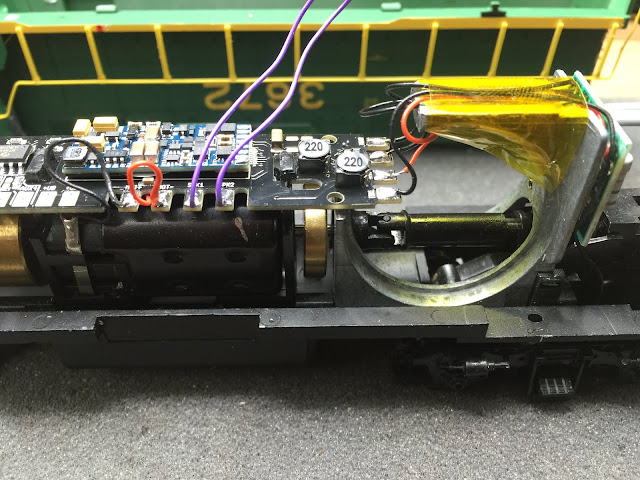 The speaker setup originally installed into this was the same ESU Sugar Cube setup as the GP35.  I however changed my mind and tried out the "closed coupled" ESU sugar cubes by two in the supplied baffle and wired in parallel.  This is an awesome combination in this unit! 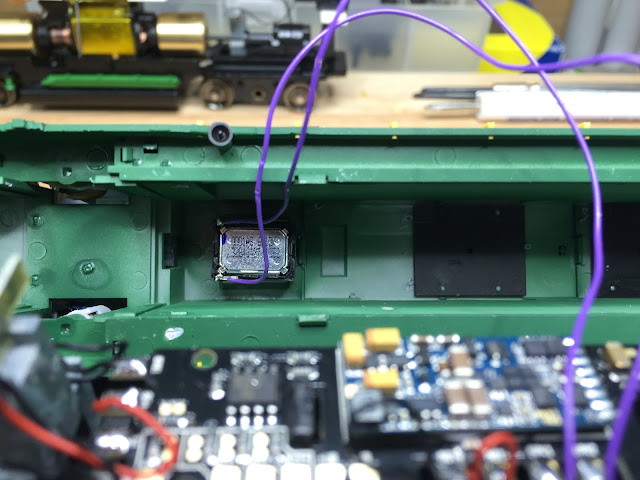 The location is still in the same spot even though the size has double.  The photo above shows a much deeper baffle for the single speaker too.  The closed couple set is a little shorter in height to make the fit above decoder better.

Next step is to fine tune the unit with the LokProgammer and post a video too...

At our last Ops Session we noticed that Rutherford Yard was tripping the entire layout (through the DCC Command Station) via the common rail.

There is nothing worse during an Ops Session than having one short take out multiple sections or worse the entire layout.  Therefore as I'm beginning to have more structured & formal operating sessions this has become the priority to fix...

Below is the first draft of the wiring and the individual power districts along with the PSX-AR's & PSX-1's.

Progress on the track work alterations...

Last night I continued on with replacing the troublesome Walthers - Shinohara turnouts.  The next section was the mainline coming out of Harrisburg into Lebanon.

When finished the I had removed four Shinohara turnouts and replaced them with one PECO - Code 83 #7 Curved turnout this replaced a crossover that again was not required.

Below is the existing track work with the Shinohara crossover in place... 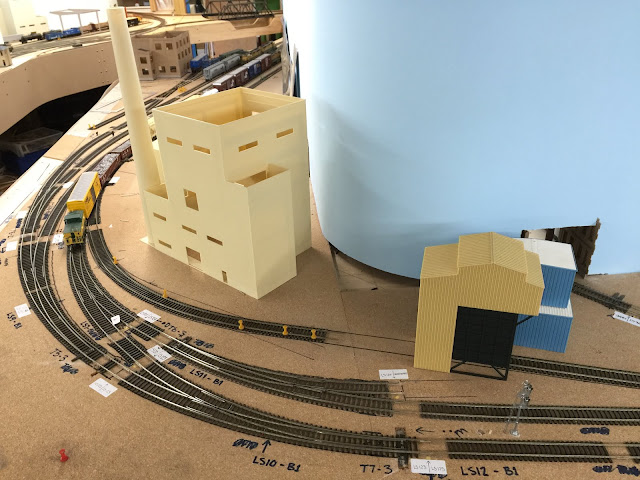 The PECO turnouts fitted quite well and was virtually in the same place as the longest radius Shinohara.  The added advantage is the the smallest radius for the #7 Curved PECO is still 28", I suspect that the outside is something around 32 - 36" mark. 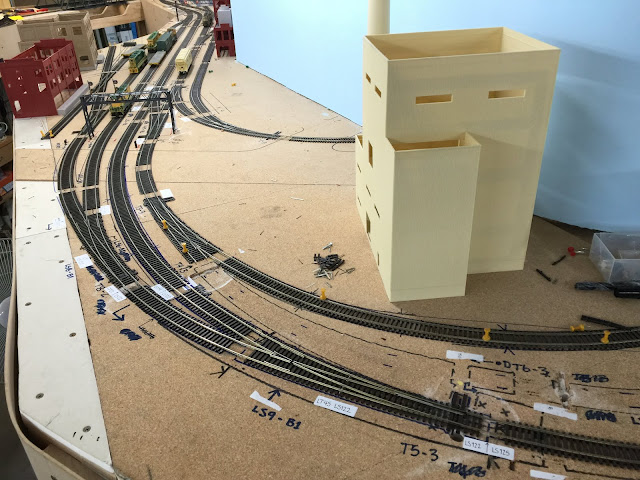 I also managed to realign a few of the curves coming from Harrisburg into the new PECO turnout, this has made the curves flow much better and also centred the spacings between the other tracks/sidings. 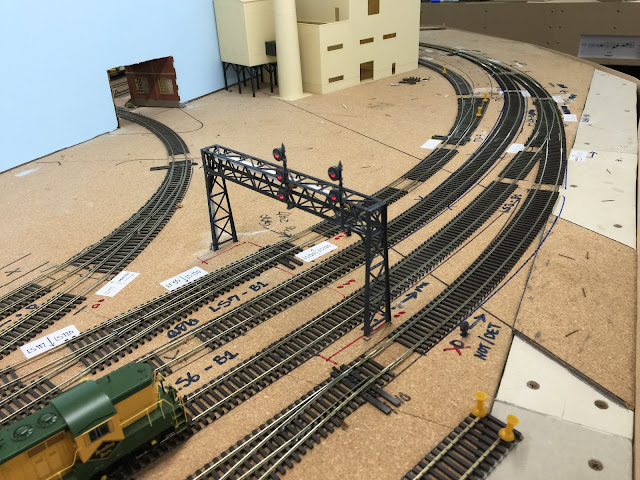 One of the offshoot advantages of re-justifiying the turnouts & crossovers and replacing them with just one turnout is that I now have spare detection blocks to use in other areas (I had maxed out my BDL's) also the flow is much better and operations will benefit greatly from this exercise.

This week I have been fixing a persistent problem that has been bugging the layout for around the last twelve months.

When I originally did the track work for the layout I used a combination of PECO Code 83 track & turnouts and Walther's Shinohara Code 83 turnouts.  The build quality between the two is quite obvious when comparing the two.

For the first three to four years the Shinohara turnouts have been fine.  I had to adjust a couple of the point ends on a couple but apart from that there were no issues.  But over the last twelve months they have required regular maintenance and tweaking to keep the point closed against the rail even under Tortoise switch machine tension.

After our last ops session it was also noted that several of the turnouts were in fact out of gauge by at least 1 - 2mm on several of them.  So I have decided to replace them all with PECO - Code 83 #7 LH & RH Curved Turnouts.

This has also allowed me to do another turnout & crossover justification for the existing track work.  As the original operating plan and track work has changed since going down the switching layout path I have removed several turnouts & crossovers too.

First job was to remove the crossover coming into Rutherford.  As there is a crossover in Rutherford itself the Shinohara crossover was removed and replaced with track only... 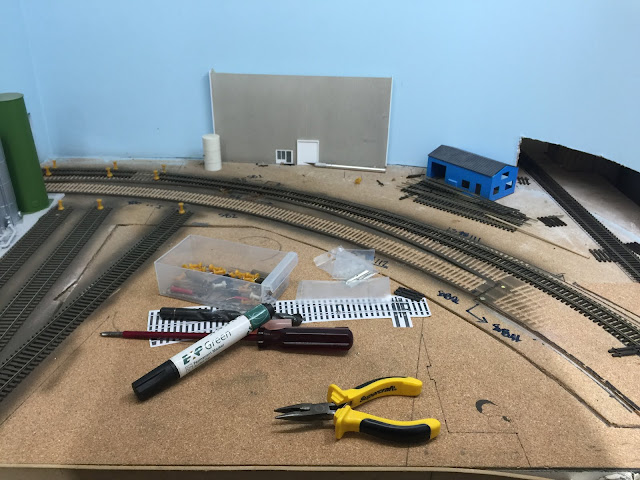 On the other side of the backdrop (to the left of photo) was another two Walthers - Shinohara Turnouts, these have also been removed... 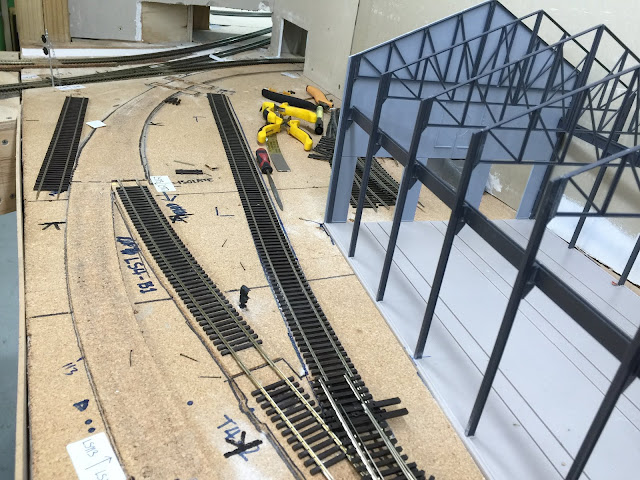 The top set of Shinohara turnouts (crossover) was a constant source of maintenance & tweaking throughout the year.

With the removal of the turnouts coming into Harrisburg this required a chance to clean up and realign the track work and turnouts.  The photo below shows the newly installed PECO #7 Curved turnout coming into a #8 RH turnout which is also Code 83 PECO too. 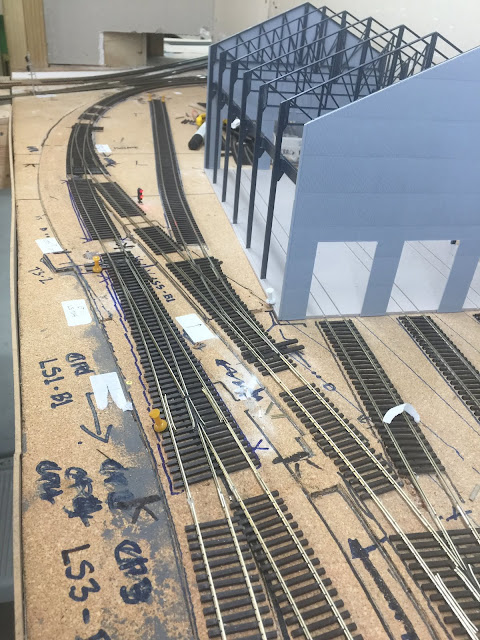 When looking from the other direction the flow of track has been improved greatly and it has also removed the excess curve that was there from using the original Shinohara turnouts as can be seen by the existing cork road bed to the right of the track. 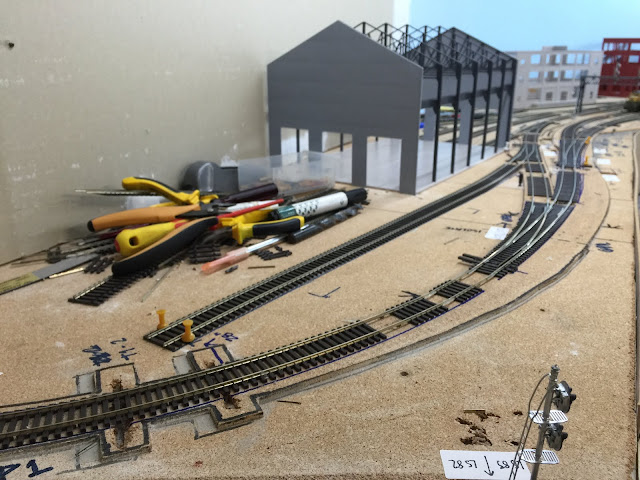 To finish off I also removed a slight hump that existed from the mainline coming from Carlisle Junction (from the left) to the right into Rutherford right underneath the backdrop, the transition is now a perfect grade into level with no more hump. 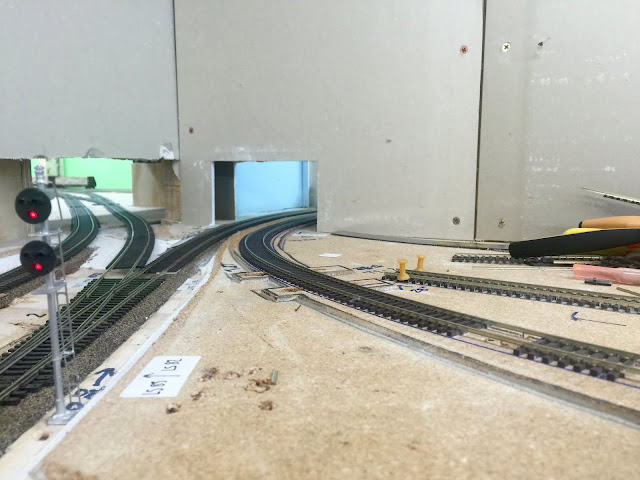 Next step is to work my way around the remainder of the layout and replace all of the Shinohara turnouts.