Last of the L&T entrances to be hidden...

Well over the last few days I've had the chance to work on hiding the entrance to the L&T branch which is the last one to be worked on before I start on the scenery for this area.

I didn't want to use the same method on the entrance to the L&T so had to come up with another method, the front runner at the moment is using the Walthers Modular Kits again but in a different configuration... 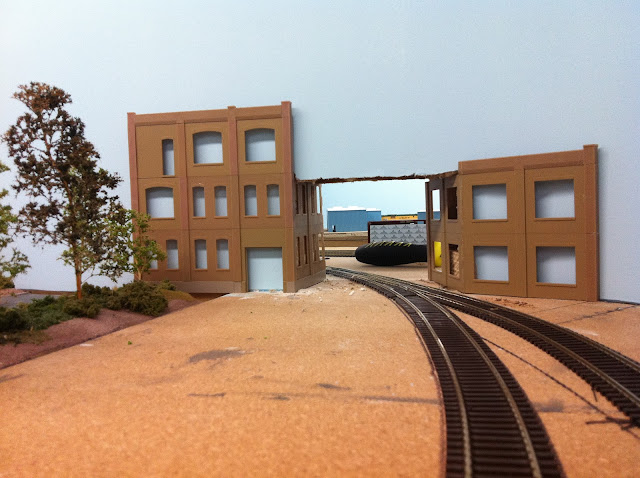 The Walthers Modular Kits have been re-arranged into a different configuration so that there not the same as the other structures, one of the brilliant things about them.  I've also played with the angles with the structure on the right, this was to allow clearance for locomotives and rolling stock to clear the structure.

The method that I'm going to employ to hide the horizontal edge of the backdrop is going to be a BLMA Double Billboard. 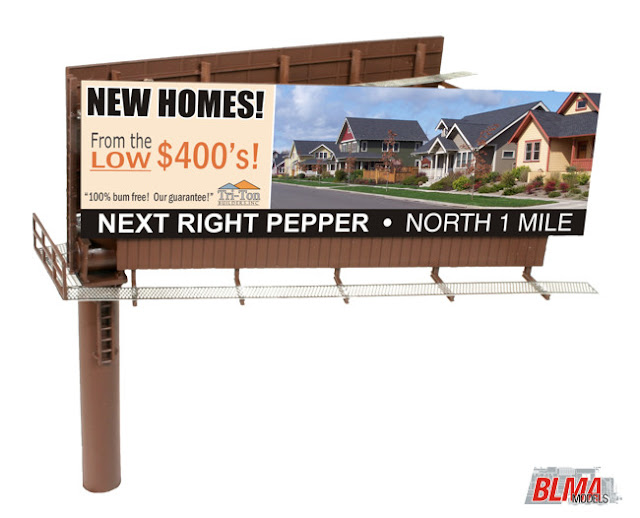 This will be placed in the ROW just to the right of the loading door on the structure on the left, it will be angled so that rear board is inline with the backdrop and facing billboard is pointing to the roadway on the JL&T...

Here is a crude Photoshop rendering... 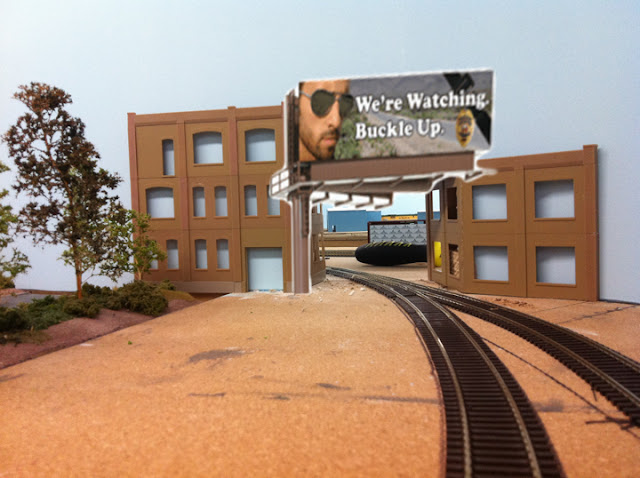 The area between the left structure and fascia will be a vehicle storage and loading/unloading area.

And here is a shot of what the area looks to date from the finished JL&T Module looking across to the L&T... 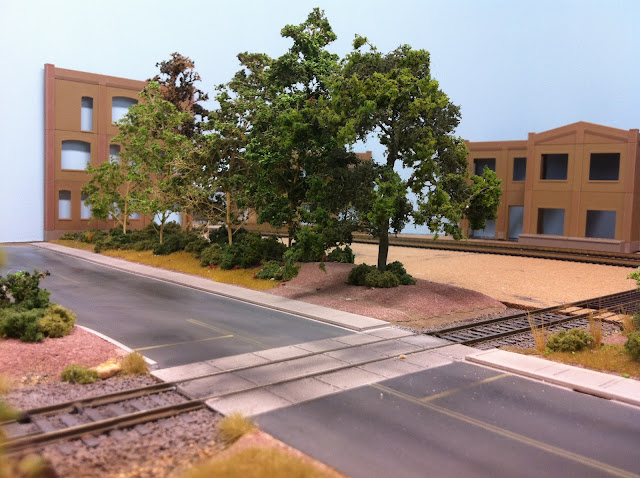 Hi,
Well yesterday I managed to get the last of the major structures (although minor in itself) completed on the first section of the L&T Branch.
The structure is an unloading shed for plastic pellets used in the forming of parts for the Appliance Manufacturing Plant, there are still some minor pieces to be added like a series of storage silos for the various primary colours of pellets, piping for conveying the pellets from the unloading shed to the silos, compressor unit, and various detail parts.
This build was fairly straight forward in that the main structure being a Pikestuff Kit (Modern Small Enginehouse) are not that difficult to build apart from the odd bit of trimming required to get sections to match.  The difficult part was getting the structure to join the curved backdrop.
This section of the layout has a 45 degree curve and required about a 1/2 of the structure to form to this curve.  Firstly the structures walls and opening were made, as it only requires two sides to be completed, I then positioned this against the area that I wanted it to be and marked out it's position on the backdrop and subroadbed for reference..
Then I cut out a piece of paper that formed the 90 degree angle of the front and side wall of the structure and formed the curve along the backdrop, this the forms the reference for the cutting of the roof later on.
One issue that I was faced with was securing the backdrop side roof to something that would stop it from dropping or sagging after time.  Being on a curved backdrop required a little lateral thinking, so I added a piece of double sided tape to the backdrop in between the front wall and side wall.  To this I added a piece of square styrene tube that I formed to the backdrop curve, this then formed the support that was needed for the roof to sit on.

The tape will also be used for adhering a photo insert of the internals of the pellet unloading area later on.  Once the support was in place it was a matter of constructing the roof sections and trimming them down to fit each section and the curve of the backdrop.
Once each section was glued and allowed to dry, I placed the paper template over the roof section and marked out the curve and scored the line with an Exacto knife and removed the waste.  Some trimming was required as I allowed a little in case the the template was out as the Pikestuff roof's have a very small pitch to take into consideration.

Finally I added the rooftop ridge vents and powered extraction fan, as mentioned before a few more minor additions to be added along with detail parts & lighting and the structure will be ready for painting and weathering.

This has been yet another enjoyable build and easily done in a full day from start to this stage, I'll post some more photos as we progress.

Styrene all finished, to be painted & weathered...

Well today I finished laying the remaining sheets of styrene for the unloading area and driveways for the Metal Stamping Plant.
All that is left is to add the detail parts and install a concrete storm pit near the curved turnout.
Once I have finished the Plastic Pellet unloading shed I will begin adding the remaining ground scenery from the start of the L&T Branch to the start of the curved turnout.

Well just about finished this section of styrene/concrete area.  I have one more piece to go in and it's ready for detailing.
The details will include placing styrene into the building loading doors to match the outside area, stormwater grates, manhole covers, supports for the overhead crane, bollards and what ever else I can think of.
Here a few photos from what I completed tonight...

Is turning out to be quite an enjoyable build...
Jas.
Posted by JLandT Railroad at 23:20 No comments:

Well progression on the styrene/concrete unloading area of the Metal Fabrication Plant continued yesterday and things are moving along quite nicely.
I'm at a point now that I can lay a 100mm x 100mm section (4"x4") on both sides of the siding and the section in between the rails.  The method I have adopted is quite reliable even with differing radius on different rails.  I use a piece of paper cut to the width of the section to be laid, and then place the paper over the next section.
Then using pressure I run my fingers of both section of the rail to leave a indentation in the paper and the paper to be cut out.  I then cut out each section with a pair of scissors and lay it over a sheet of styrene.  I then either mark the section with a pencil or glue the paper section to the styrene and then scribe it with an Exacto knife till I can snap the waste section off.
Once the section is cut out I then place it into the section and trim and alter it to suit, it is taking me about 30 min to complete both sides on the centre rail section.
And here is the progress at the end of yesterday...

Well yesterday work continued on laying the concrete unloading area for the Warehouse and the Metal Stamping Plant, within the Appliance Manufacturing Plant.
This process is the same for the section in between the track as what I used in the crossover, the remaining section had 3mm cork roadbed added first then the 1.0mm sheet styrene laid over the top to again just finish under the top of the rail.

More to come as the progress continues...
Jas.
Posted by JLandT Railroad at 17:59 No comments: