So today was one of those days that had a few things to be done, and not a lot of spare time to get stuck into anything substantial on the layout.

I managed to build another IHC plastic Signal Bridge in readiness for the next one to take shape.  Whilst positioning the signal bridge I was mulling over the Harrisburg Industrial Area and how I was going to best use  the space and thinking about how to operate it.

Some of my moments and best ideas come about sitting and looking at the layout while having a cuppa, and trying to think about how to operate an area.

These two structures will represent my portion of the steel industry that formed part of Harrisburg's golden railroad years.  This section is a recycling site attached to the greater steel mill which on our layout will be a photo backdrop of the real thing.

The area that these two kits will be placed is on the left of the main entrance to the bigger section of the layout.  This will add some serious bulk to the entrance of the layout and will hopefully give some real industrial grime and mass to the area.

This section has now worked out better than the old arrangement as reach in is no longer an issue for operators due to all the industries and trackwork being relatively close to the aisle and fascia too.  I have also managed to get some storage track for possible one or two spots as well which is always a bonus. 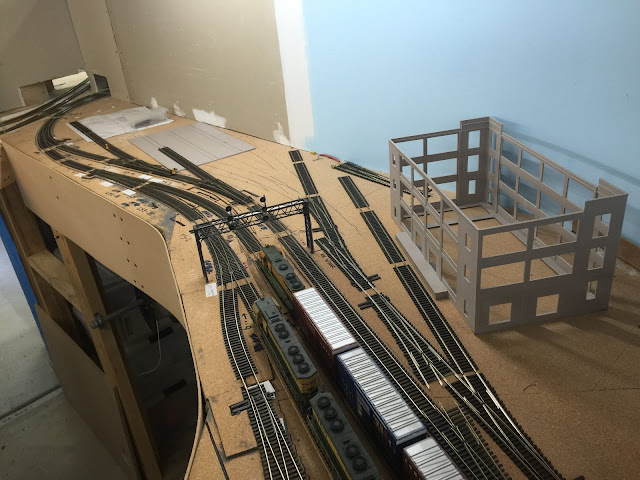 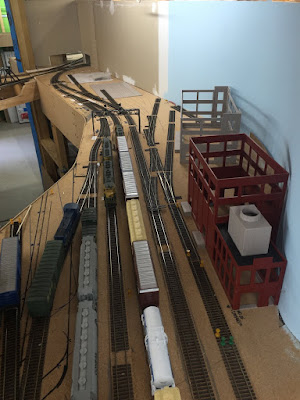 It will also allow me to have a city/commercial area in the next section along that would have created reach in issues for operators.  I always some city area to model as well so that the layout had an even balance of believability.

Next phase will be getting the turnouts and track work altered and re-installed.

Yesterday I finished off the first of our layout signal bridges.  The Harrisburg - East bridge has two triple head masts.

These masts are Tomar - Triple heads that have been converted to fit the IHC Plastic signal bridge kit.  They are also fitted with RR-CirKits Tri-Coloured LED's as the searchlights.

The installation is fairly straight forward but extremely time consuming, these two masts devoured the better part of full two days to install the LED's and feeding the wires through the bridge/conduit and wiring up.


Below masts from left to right:  Stop & Approach Medium... 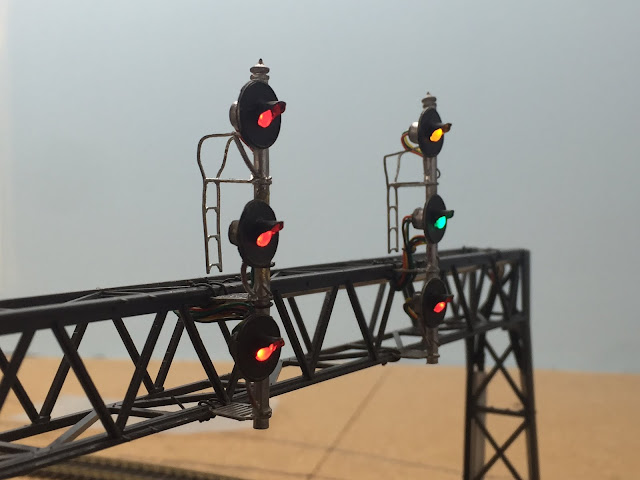 The second mast (the left one above) went much better with the wiring install as I was able to feed the wires into the mast a lot more cleanly that the first effort (mast on the right).  This was mainly to do with the difference between the wires used.

These masts and the trip coloured LED's are perfect, they can be seen from some distance easily and the colours are easily distinguishable from one another too. 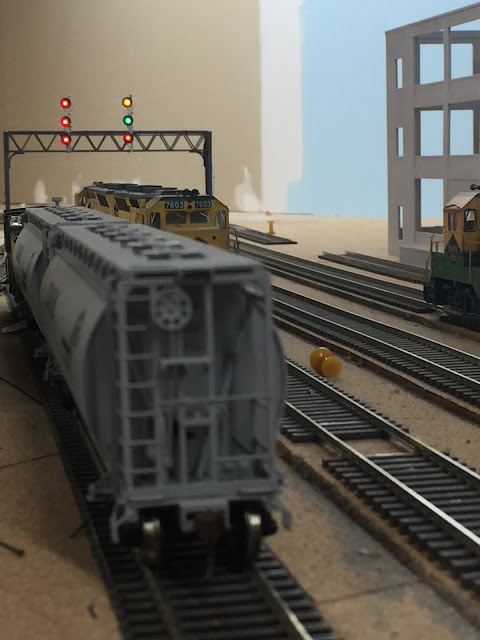 Once the next bridge is in place it will be time to program the two and then onto detailing them at a later date.

Well I have had a few busy weeks with work and not much time dedicated to layout at all.

So the last two days I have spent building more signal masts for the layout signal bridges.  It's time consuming but in a weird way I find it relaxing, when things run smoothly of course.

Recently I had a big win and found some old IHC plastic signal head kits, along with the corresponding signal bridge kits too.  The bridge kits are in fact the old watering bridge kit that IHC made but it is the exact same mould that was used for the signal bridge too.

So I have completed my first IHC plastic signal mast for one of the signal bridges. 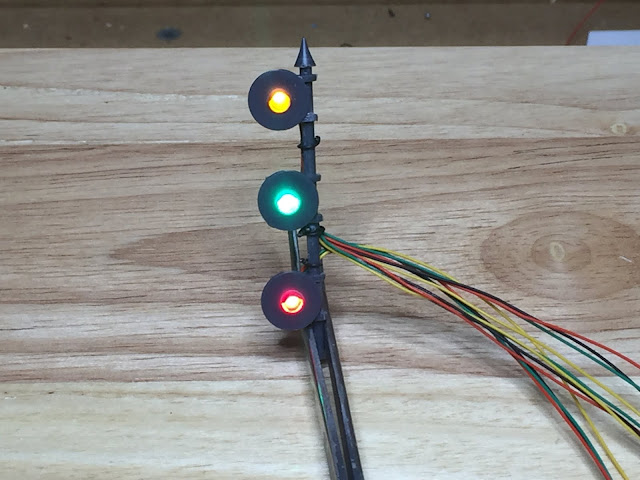 These kits are very easy to make and very adaptable too, they are perfect for the tiny 1/8" (3mm) Tri-Coloured LED's that I am using as there are no issues with shorts on brass and they are just glued together.

The detail is not quite as good as the Tomar kits that I have previously used and the wires cannot be run in the brass tube so they are exposed.  But neatly bundled and secured to the mast and once painted black they will be barely visible. 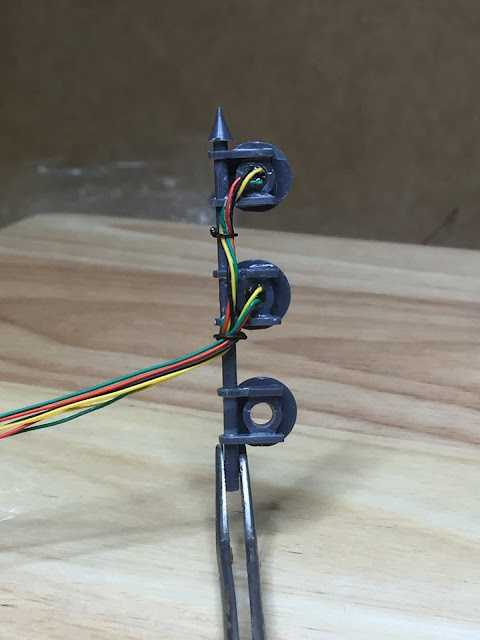 Posted by JLandT Railroad at 13:14 No comments: