I've been progressing with the installation of the storage shelves for the new section over the last week.  These are the existing shelves from our garage, once installed I will begin installing the additional layout bench work over the top of these.
This section will be the main layout staging area, that will be built and operated as a classification yard.  The framework also hide the storage shelves and everything under them, I'll be installing drop curtains that will go down the carpet square mats. 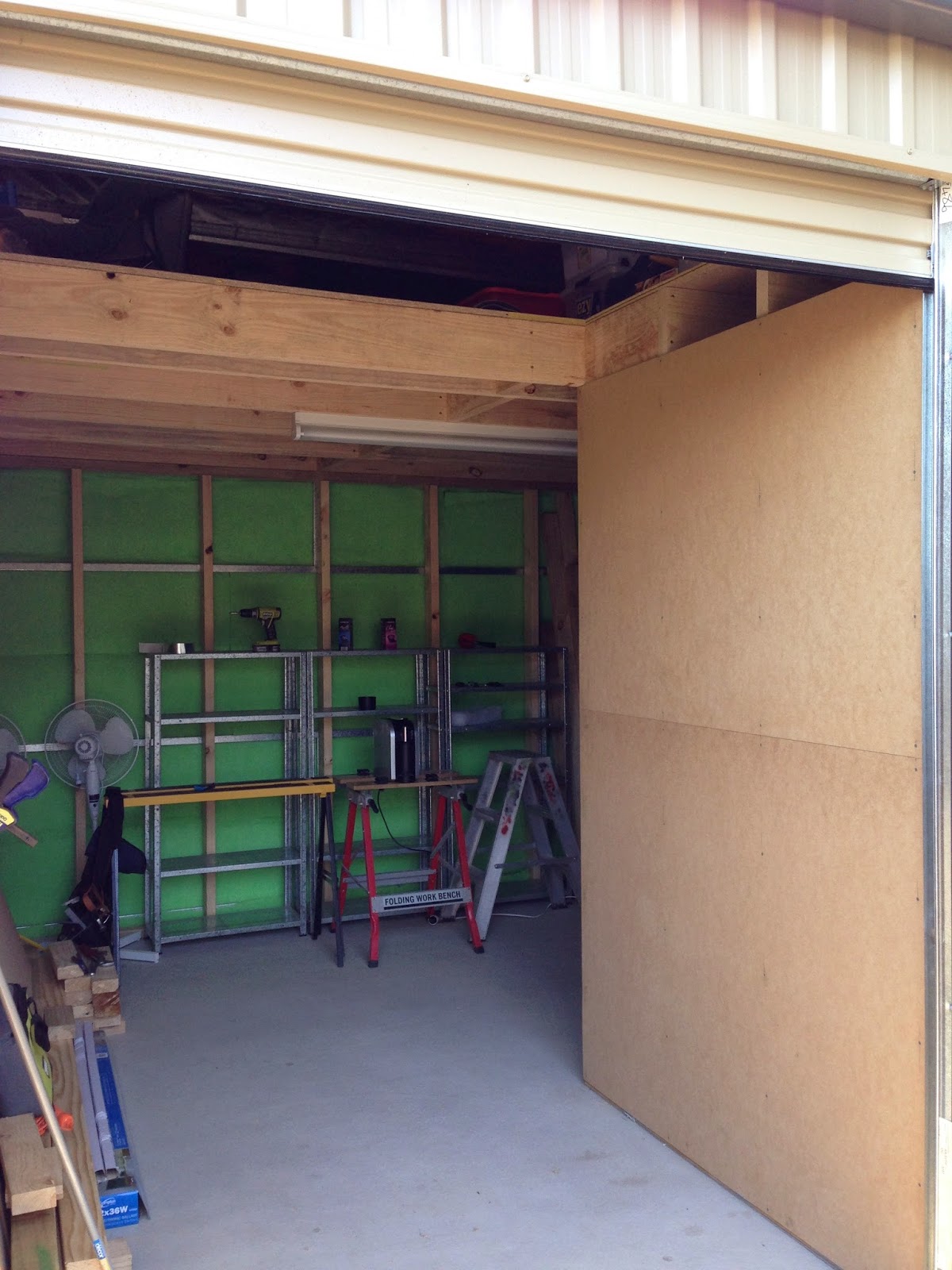 This section is the original entrance to the layout, I had to frame it out to support the mezzanine level.  In order to help seal out the dust & dirt, and further reduce any climate changes throughout the year I've installed the wall paper and filled in the gaps with insulation. 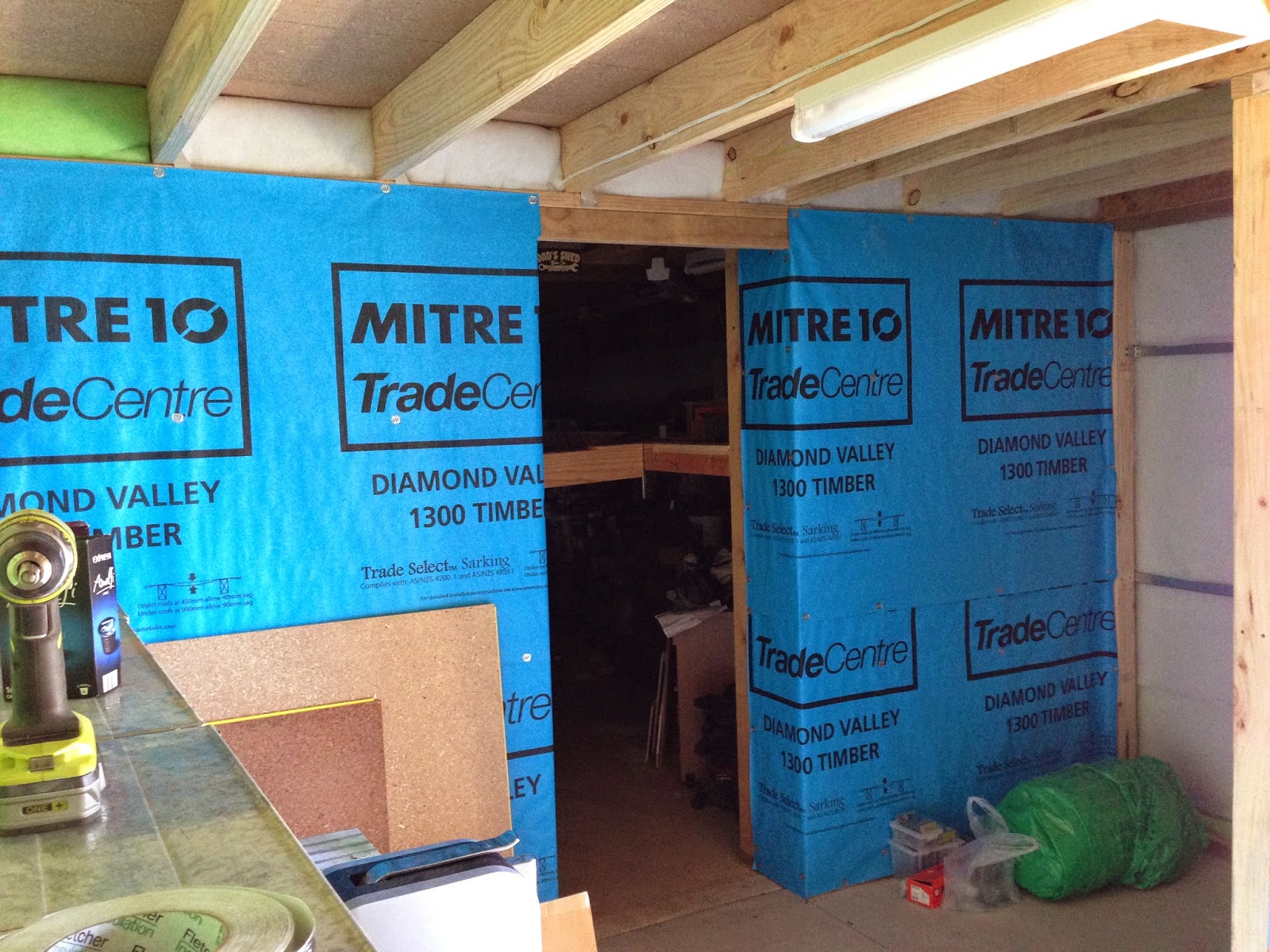 This area will also have new sections of layout installed and will be set up like the photo above, but will also get drywall/plaster.  The left section of new layout will house the yard lead from the yard to the centre peninsula and the lead to the new south section of the L&T Branch, these two areas from a "Y" for the layout.
The right section above the workbench and dispatcher nook will house the new Diesel Service & Maintenance Facility.  Then it will be time to move onto the workbench & dispatch nook area.
Jas...
Posted by JLandT Railroad at 11:25 No comments:

Well today I managed to finish installing the mezzanine flooring, the insulation and the last of the framework.

Insulation in and ready for the staging yard framework to go in... 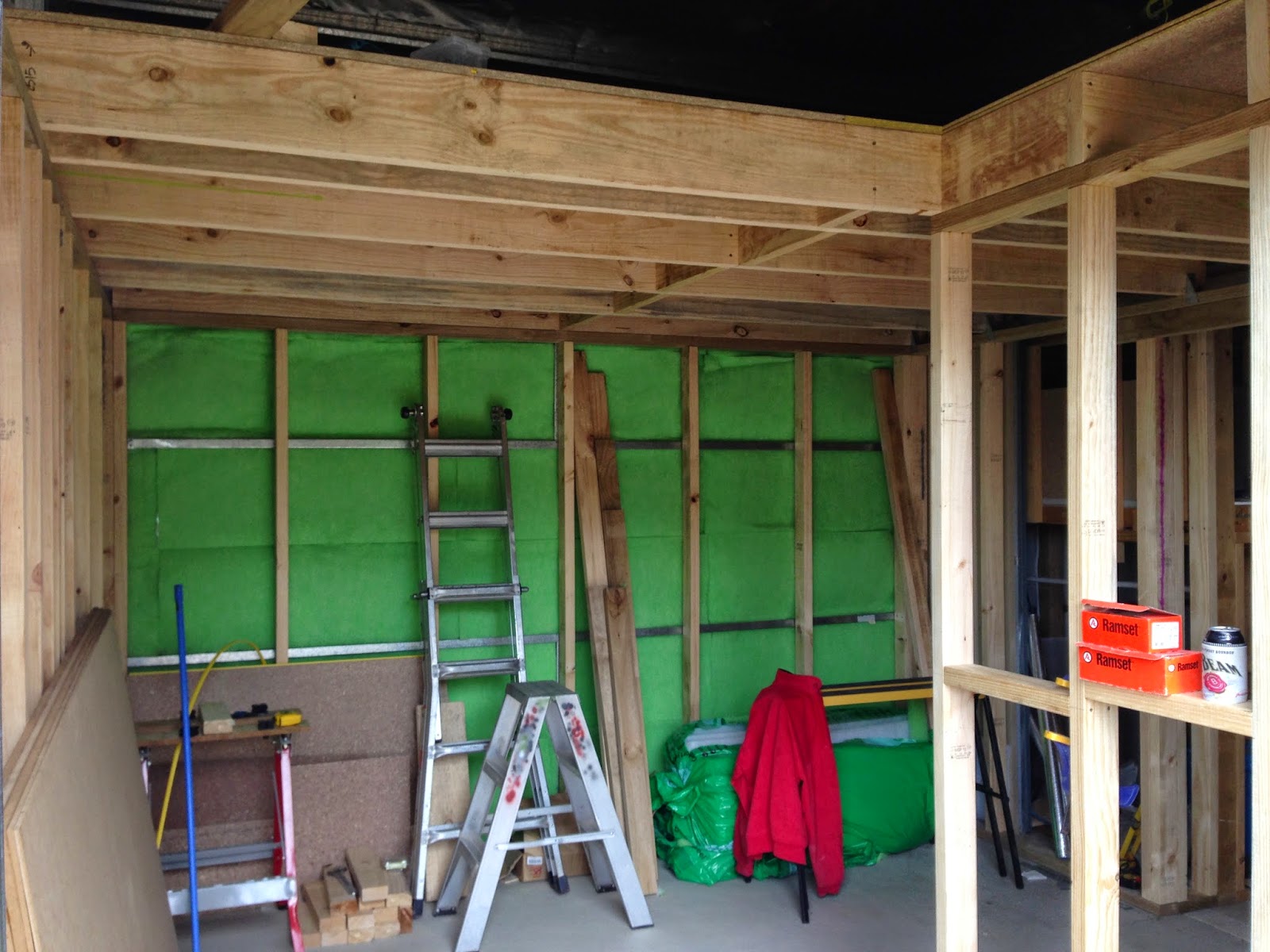 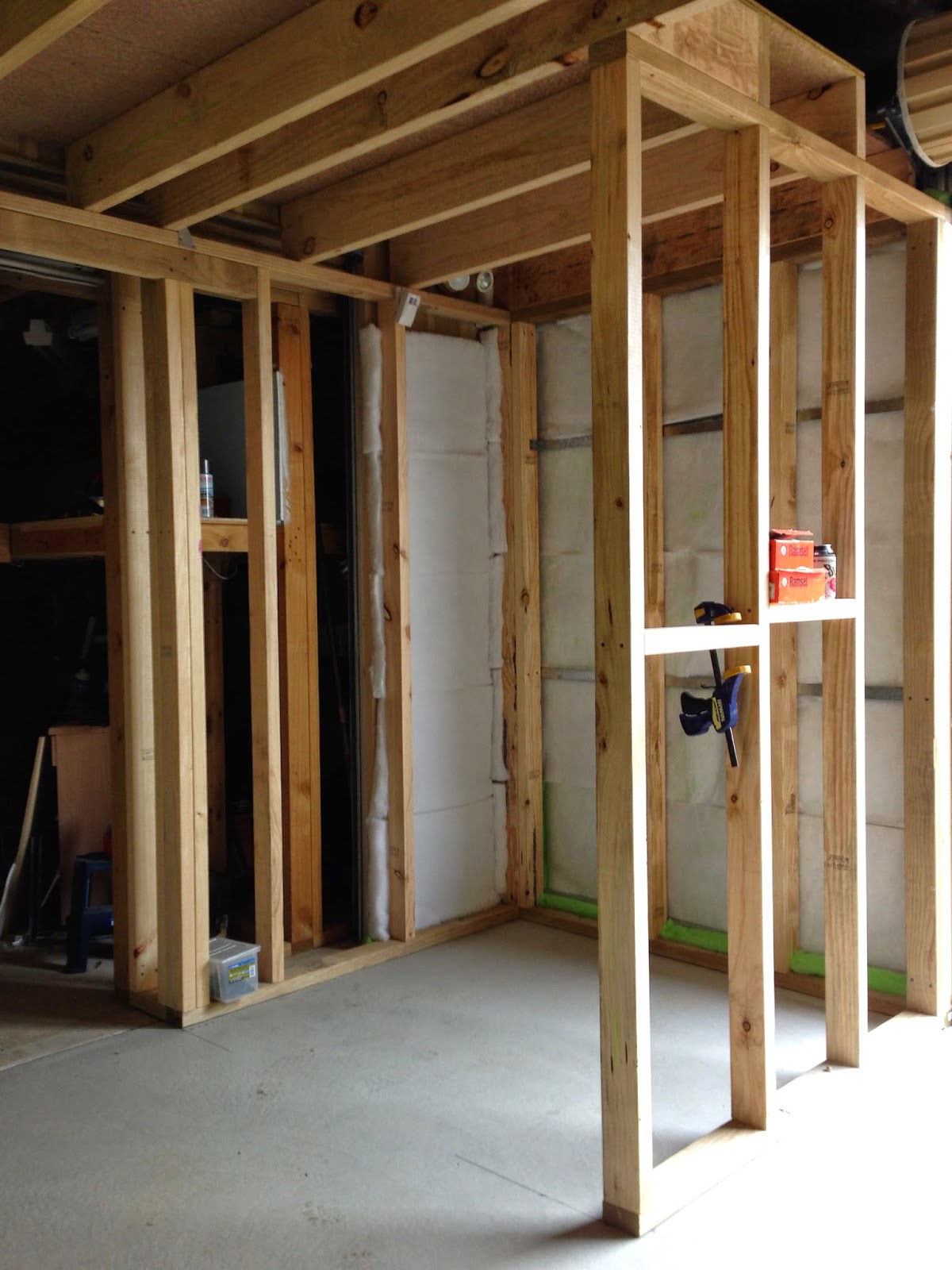 Mezzanine storage area in and completed... 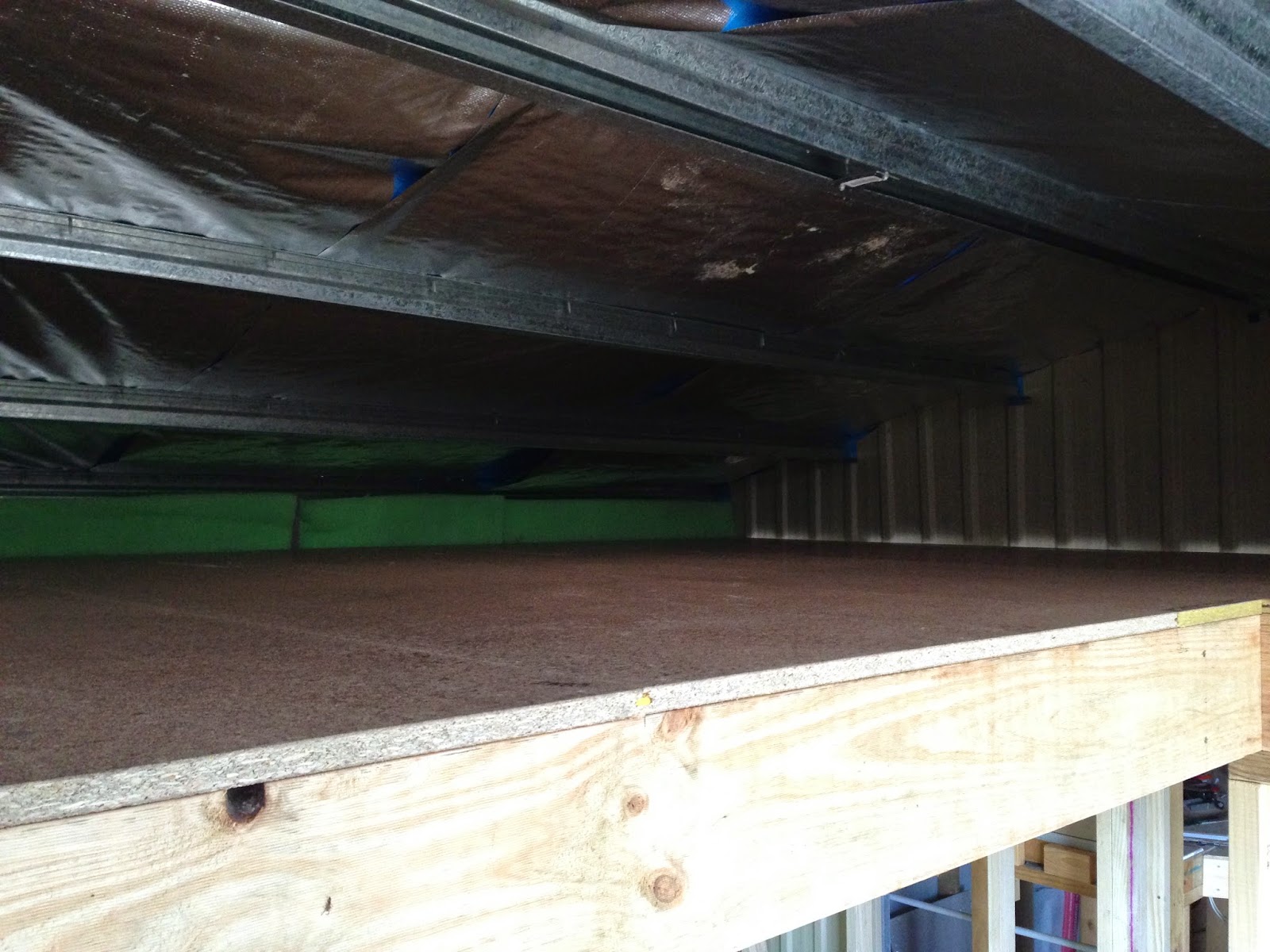 Looking into the existing JL&T Layout from the new workbench area and dispatch nook... 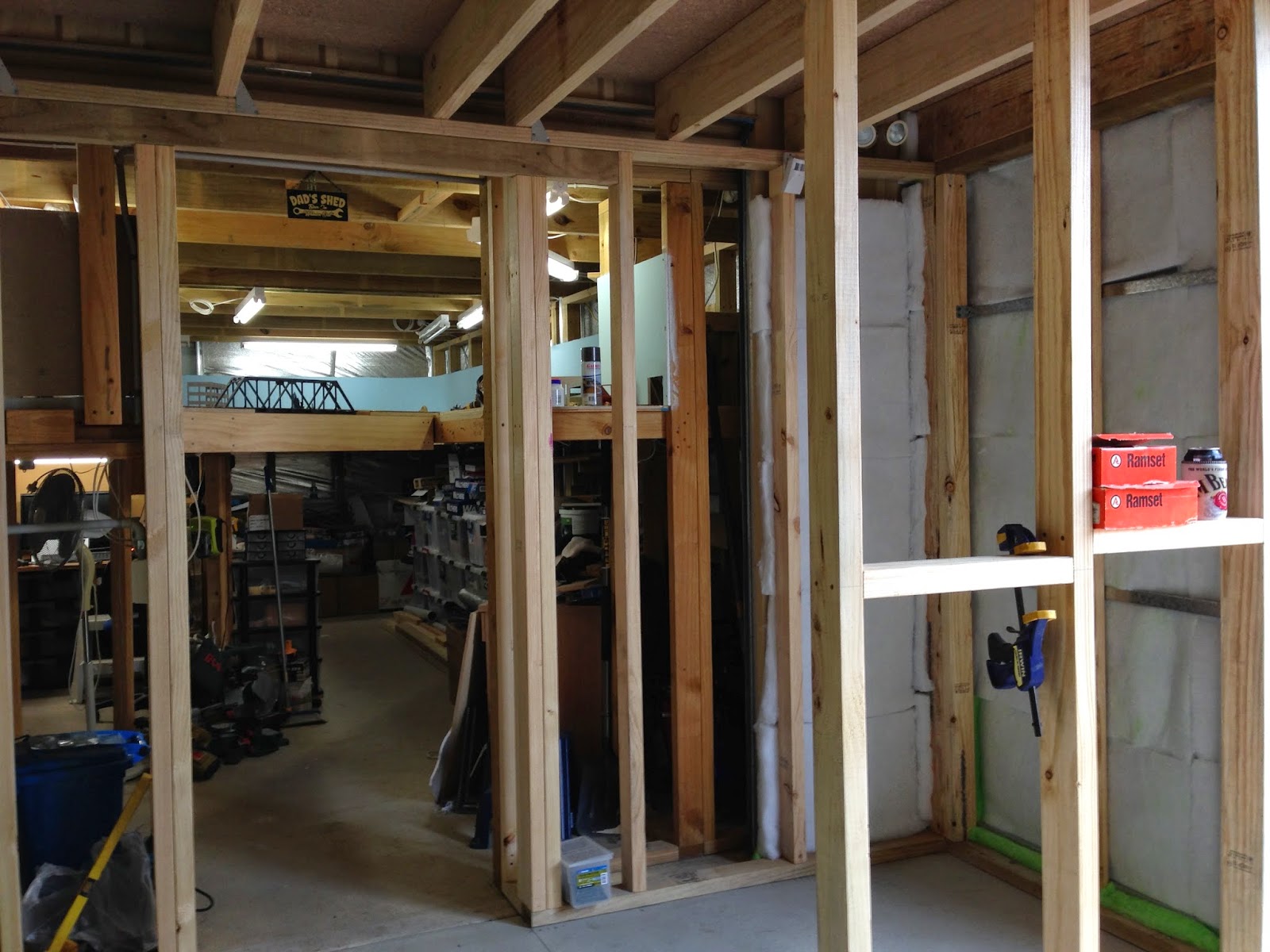 Wall cladding to go in, power points, and benchwork and all finished...

Today I got into the home stretch by completing most of the timber framing.  There are a few noggins to place in around the frame but the bulk is finished. 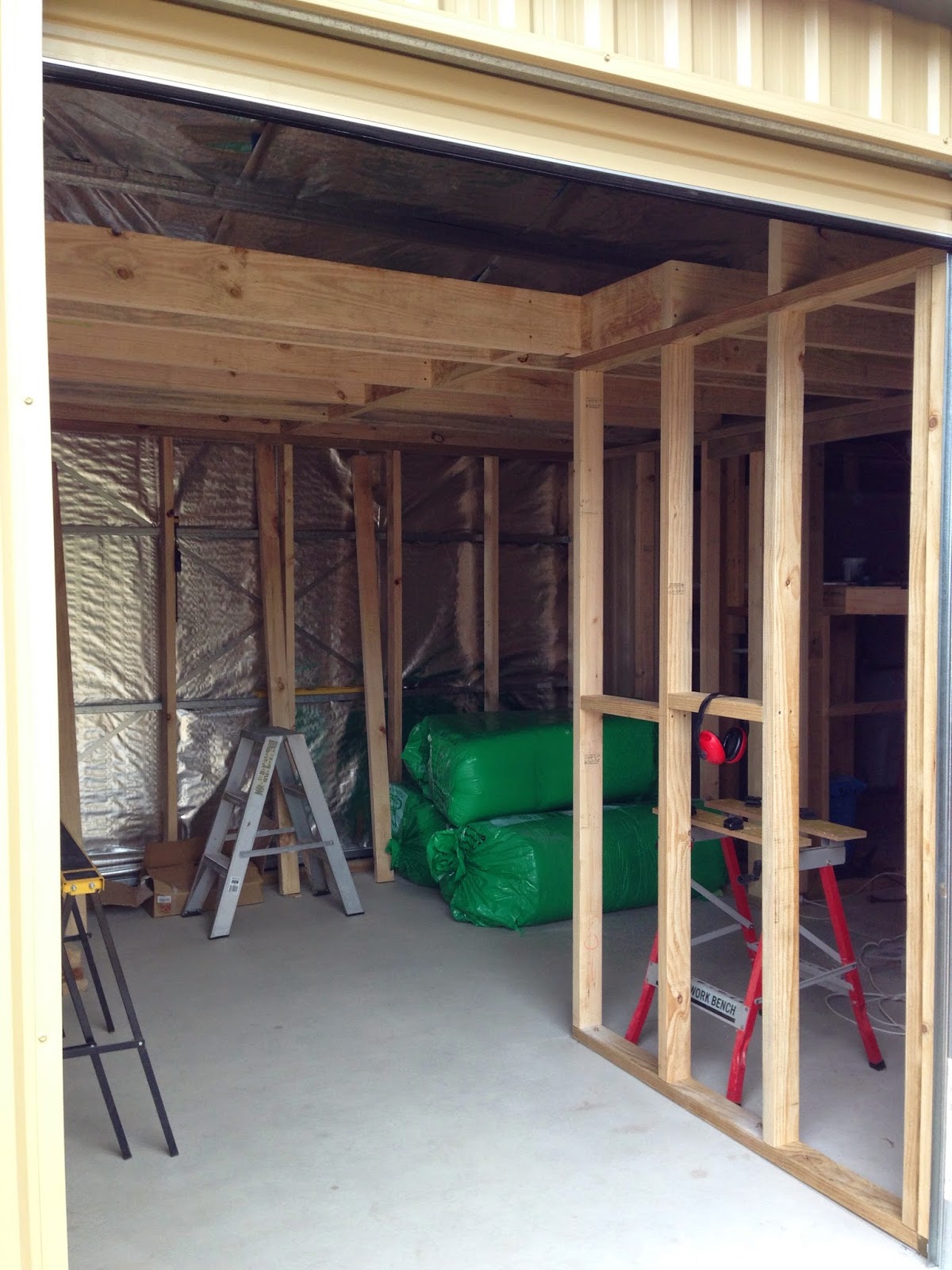 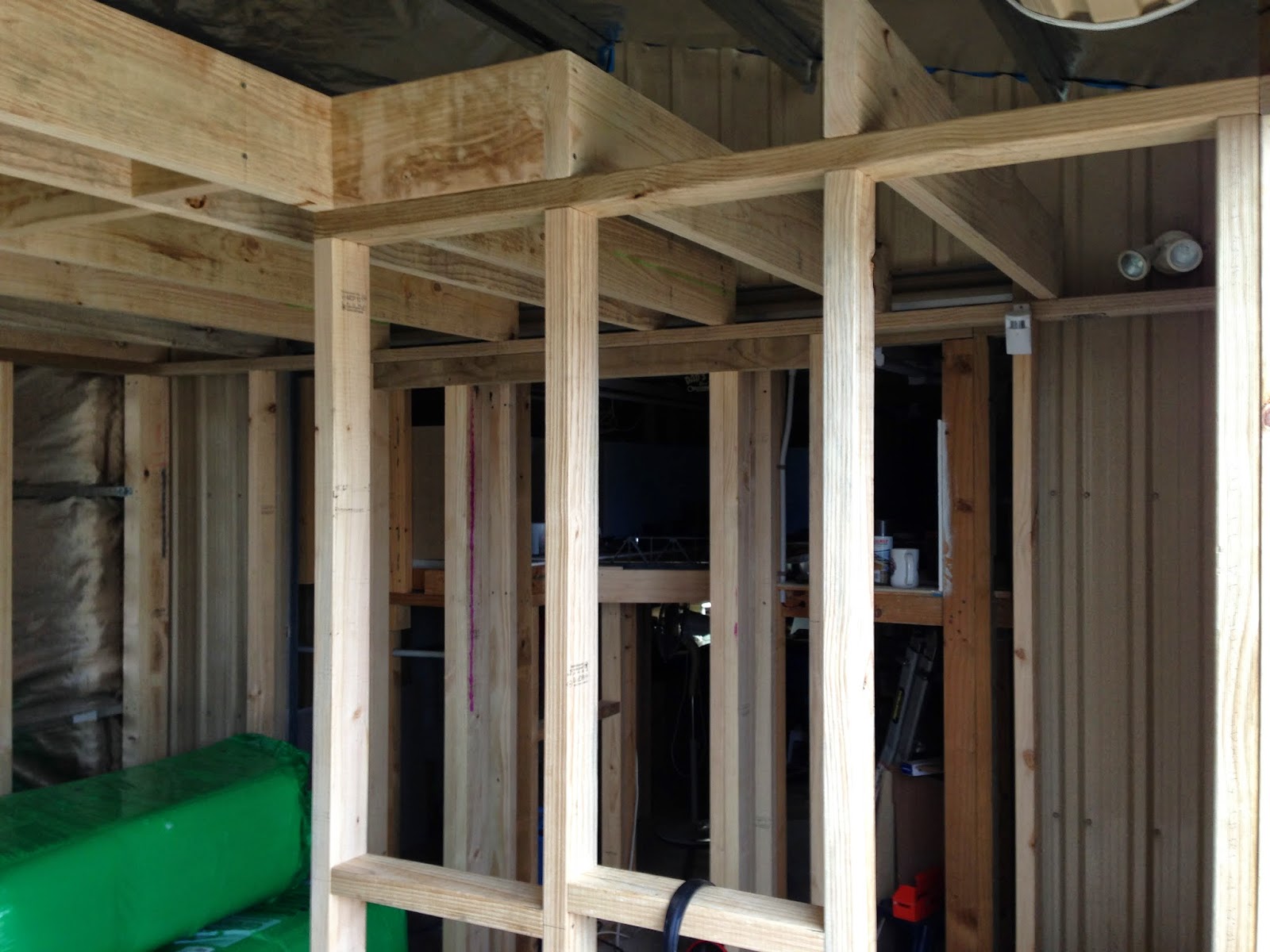 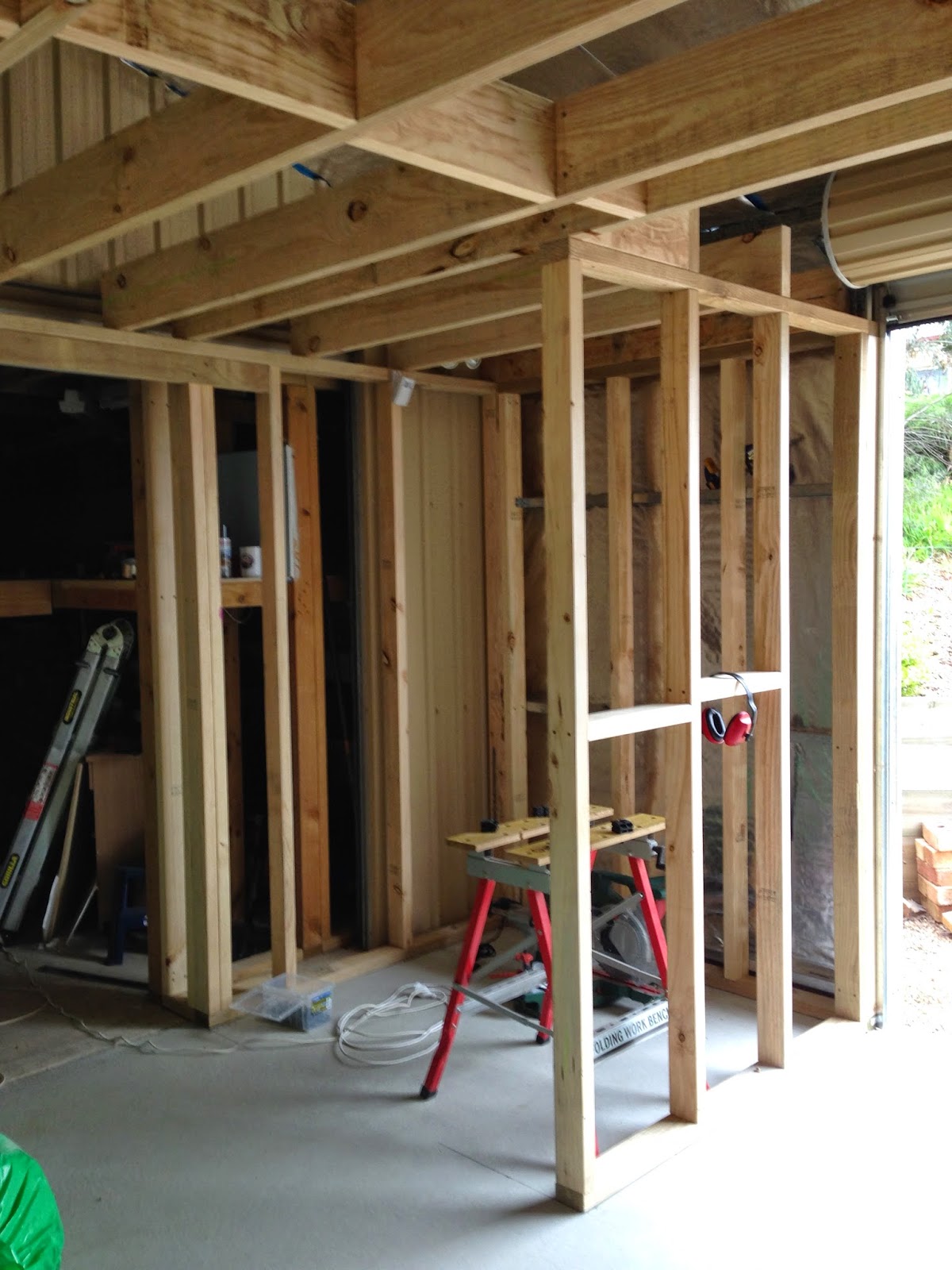 Posted by JLandT Railroad at 21:44 No comments:

Well the last few days I have been flat out (but in my happy place) doing all the internal framing for the layout expansion.

The shed extension (13' - 4m) was finished on Saturday morning and I had the timber delivered the day before ready to go. 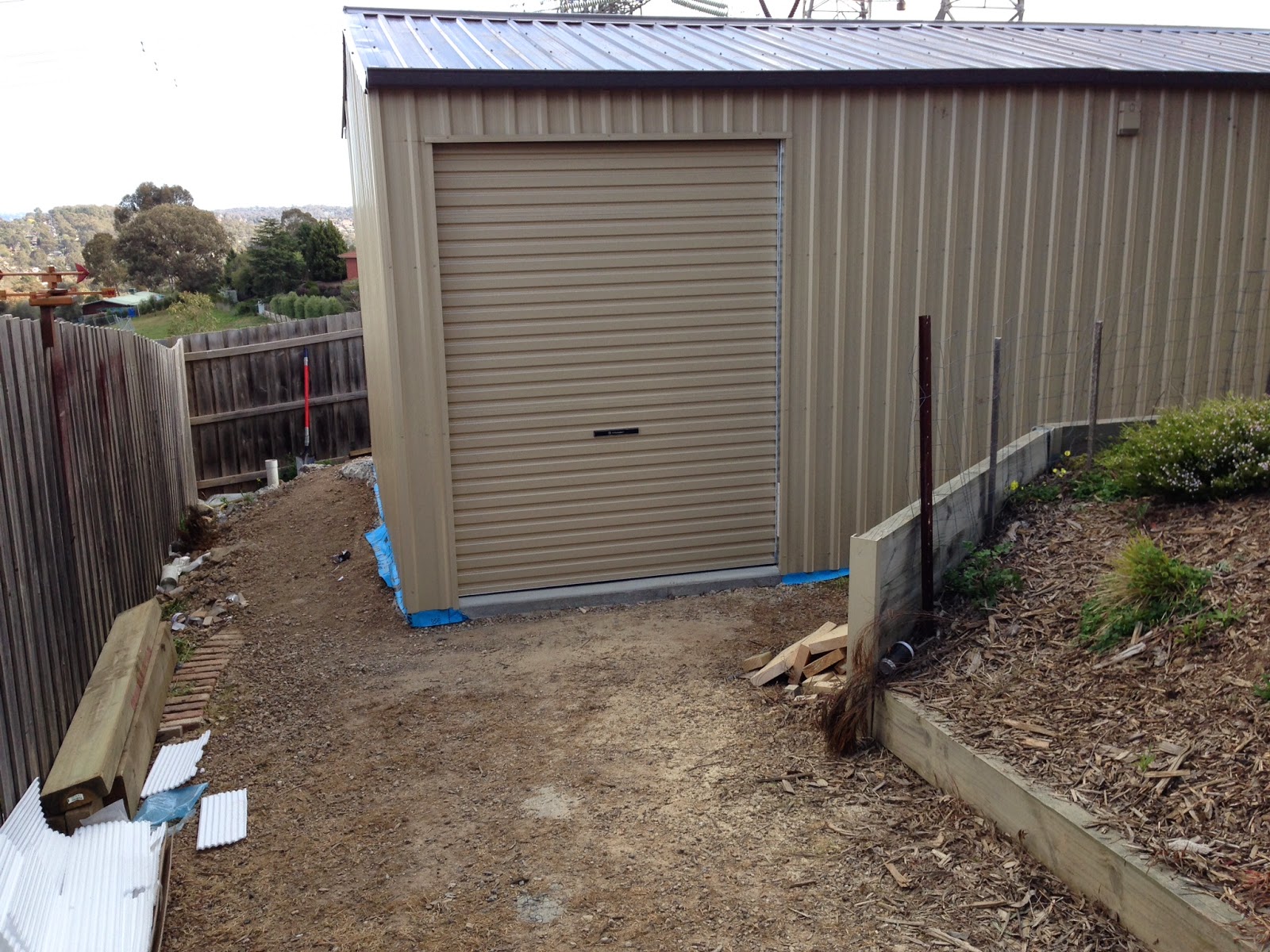 The internal frame with the portal shed frame supports the mezzanine floor within the area that is used for storage. 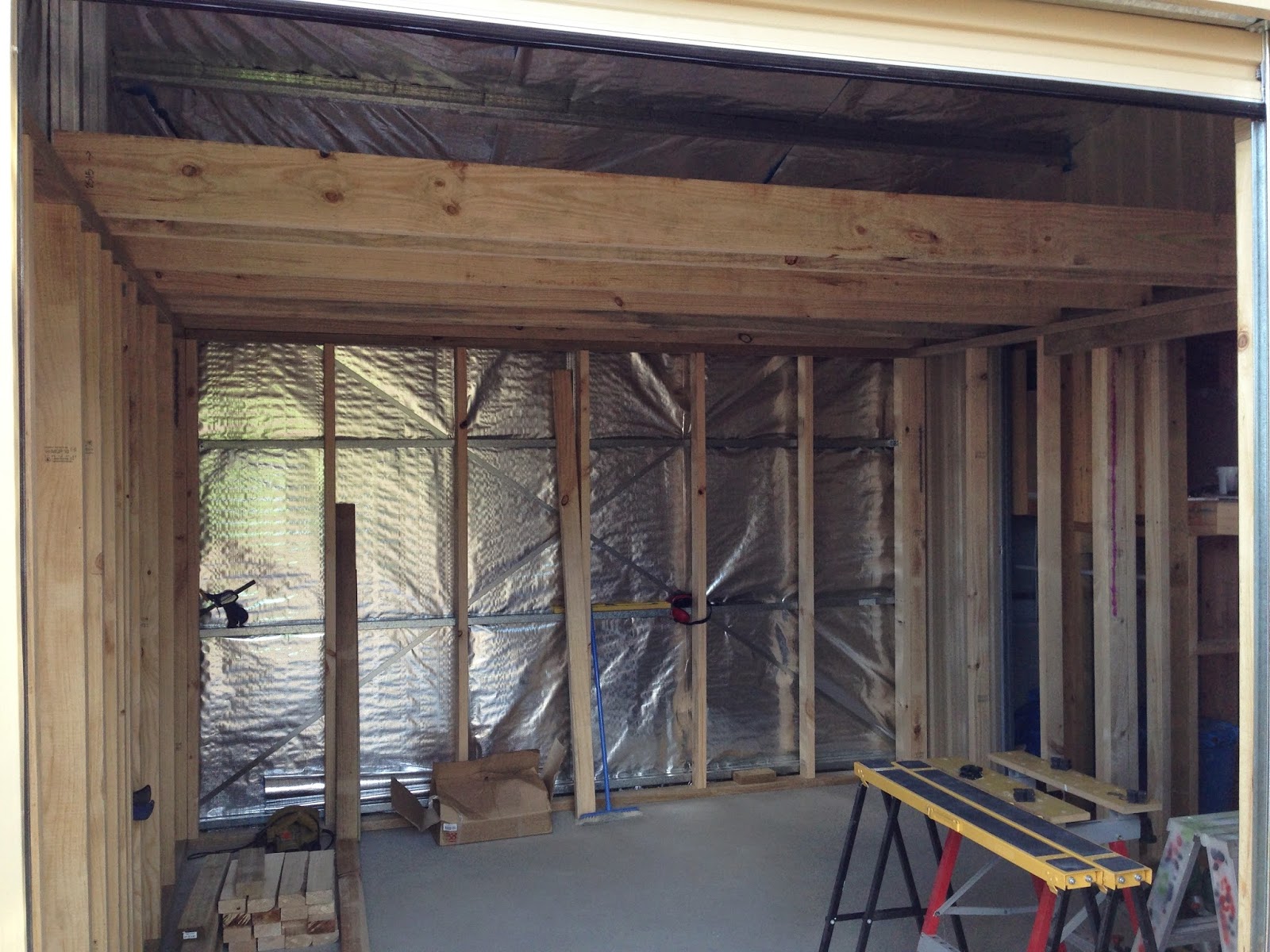 It gone relatively quickly with only one more nib wall to be put up and then the mezzanine floor gets put in. 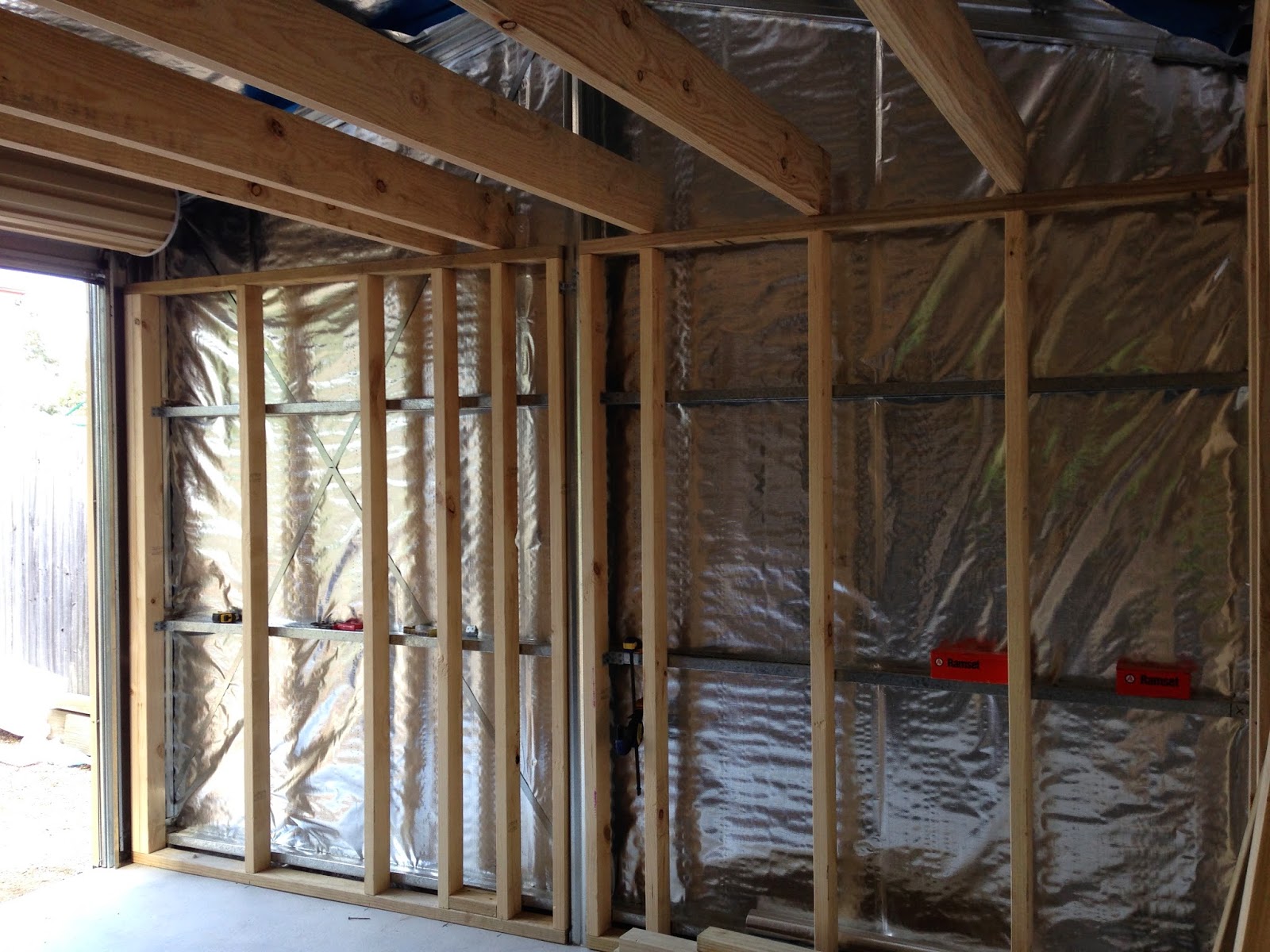 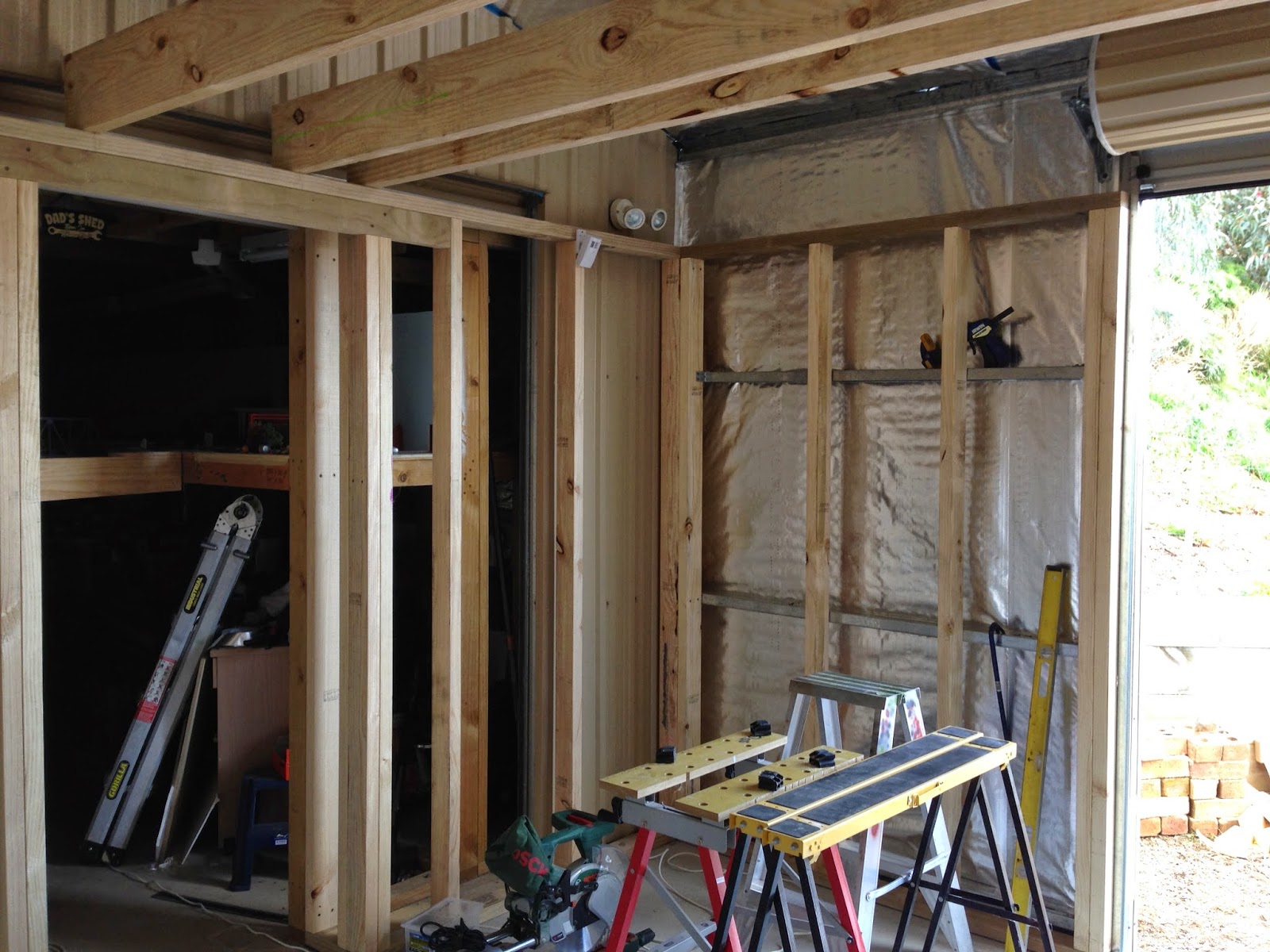 As this is going to be mainly storage for a garage stuff I will insulate walls and place plaster over this.  This will hopefully have enough room to be used as a crew lounge area for the main layout. 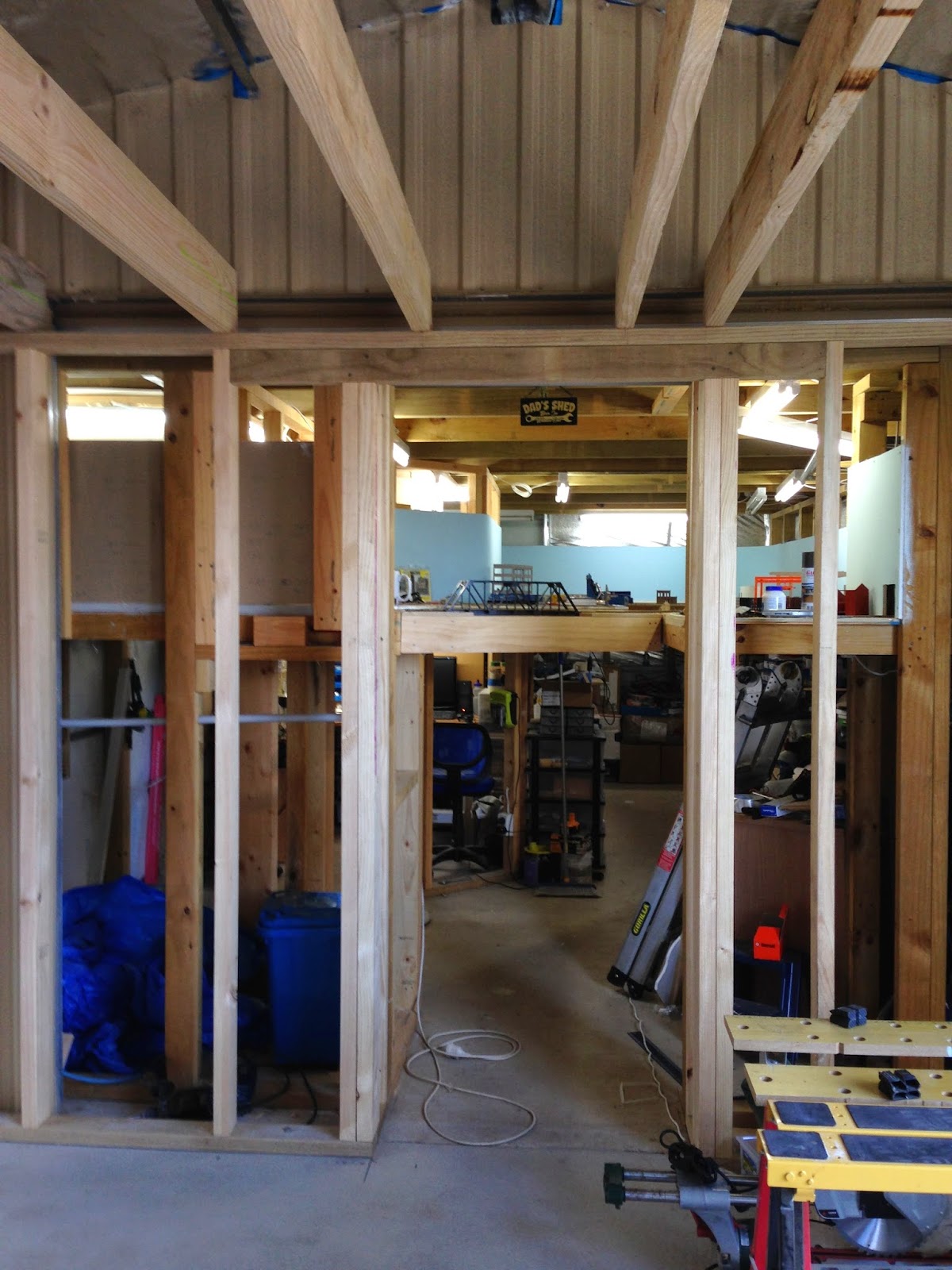 Had a lot of fun to date, sometimes there is nothing more relaxing and calming than throwing on the Nail Bag, making a few measurement, cutting some timber with compound/mitre saw and building something from the ground up...


Posted by JLandT Railroad at 16:29 No comments:

Well the latest RDG SW1500 switcher #2763 has arrived safe and well and is now working on the L&T Branch.  I have installed a spare TCS T1 decoder in it to get it working and test it out. 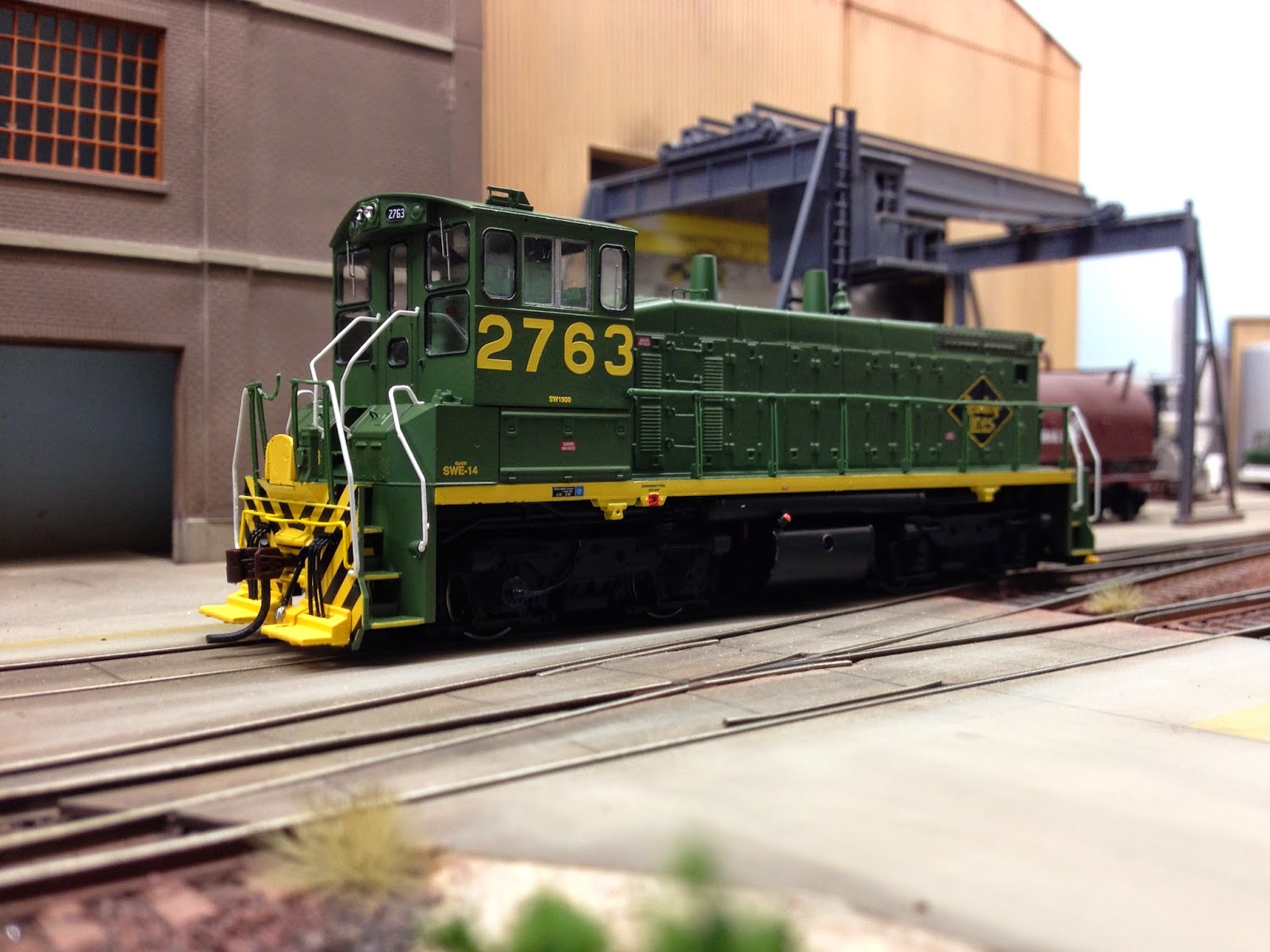 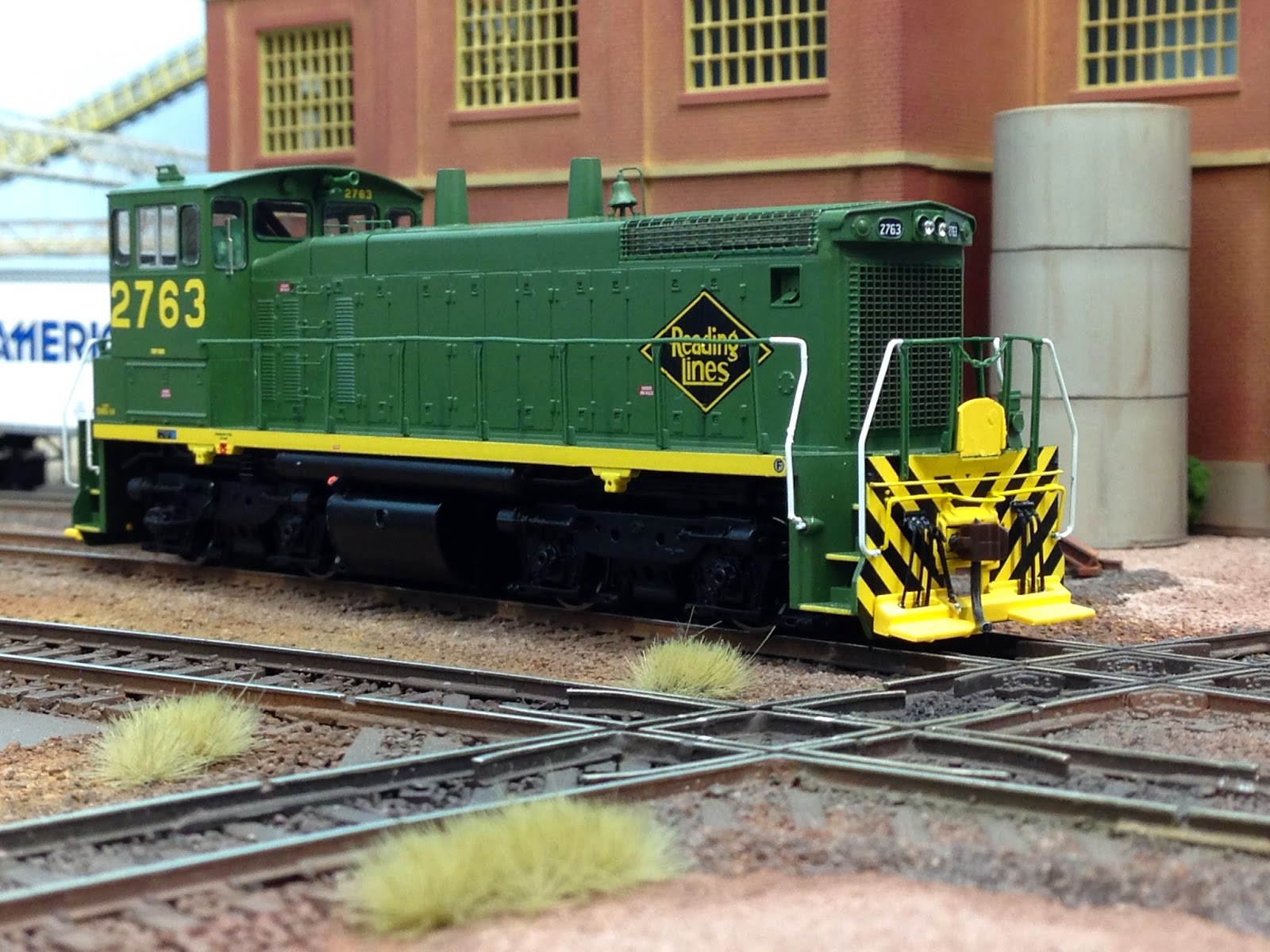 Next step will be to add Soundtraxx Tsunami Sound & LED lights. 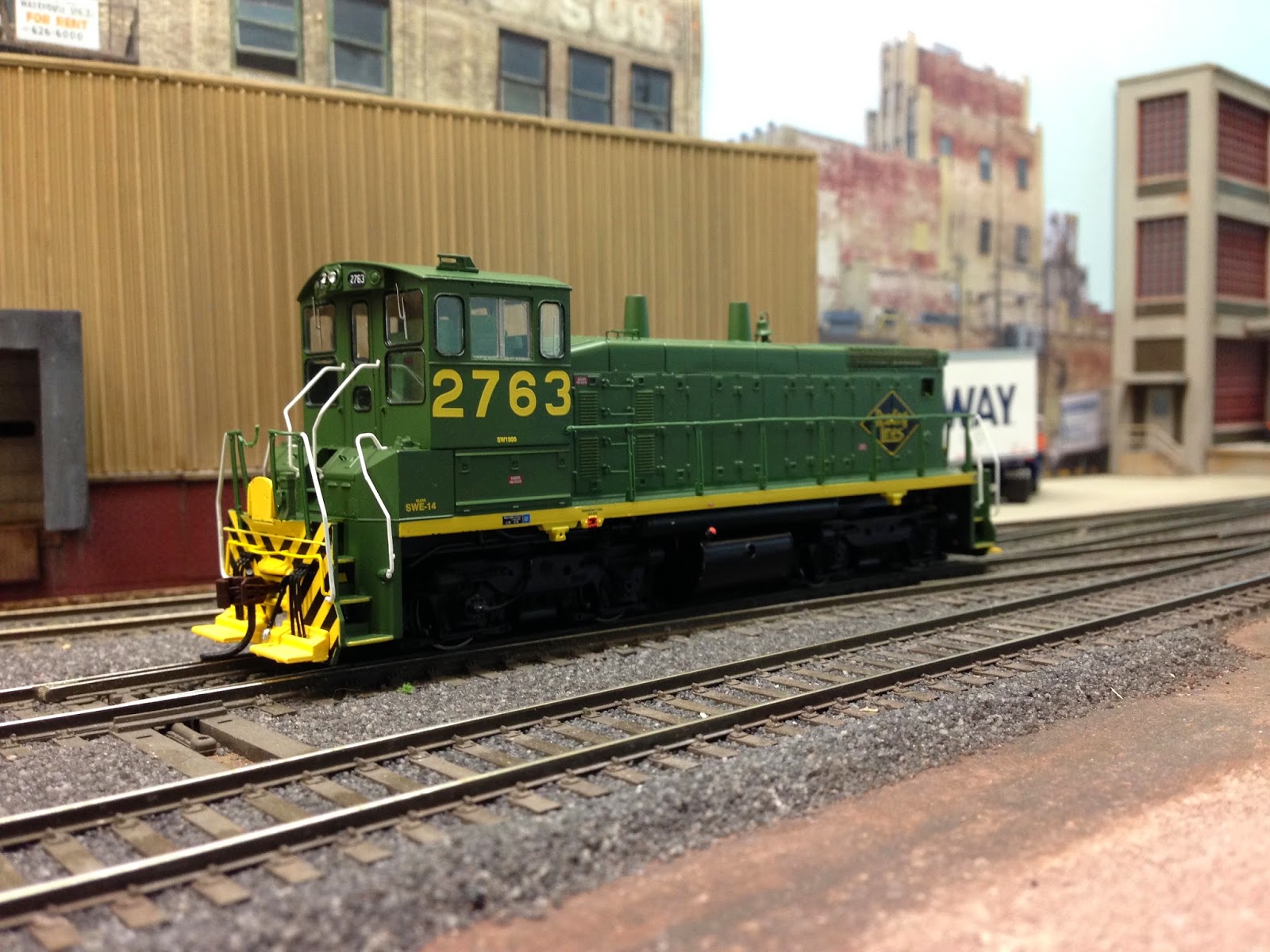 Here is the wiring diagram for how I have set up the Lift Out Bridge (LOB) on the JL&T.  This is now the second version of the LOB, and it has been realigned and widened to make the track work in this section flow better and allow the installation of THE #8 LH Turnout that will eventually go to the Staging Yard.
Wiring Diagram: 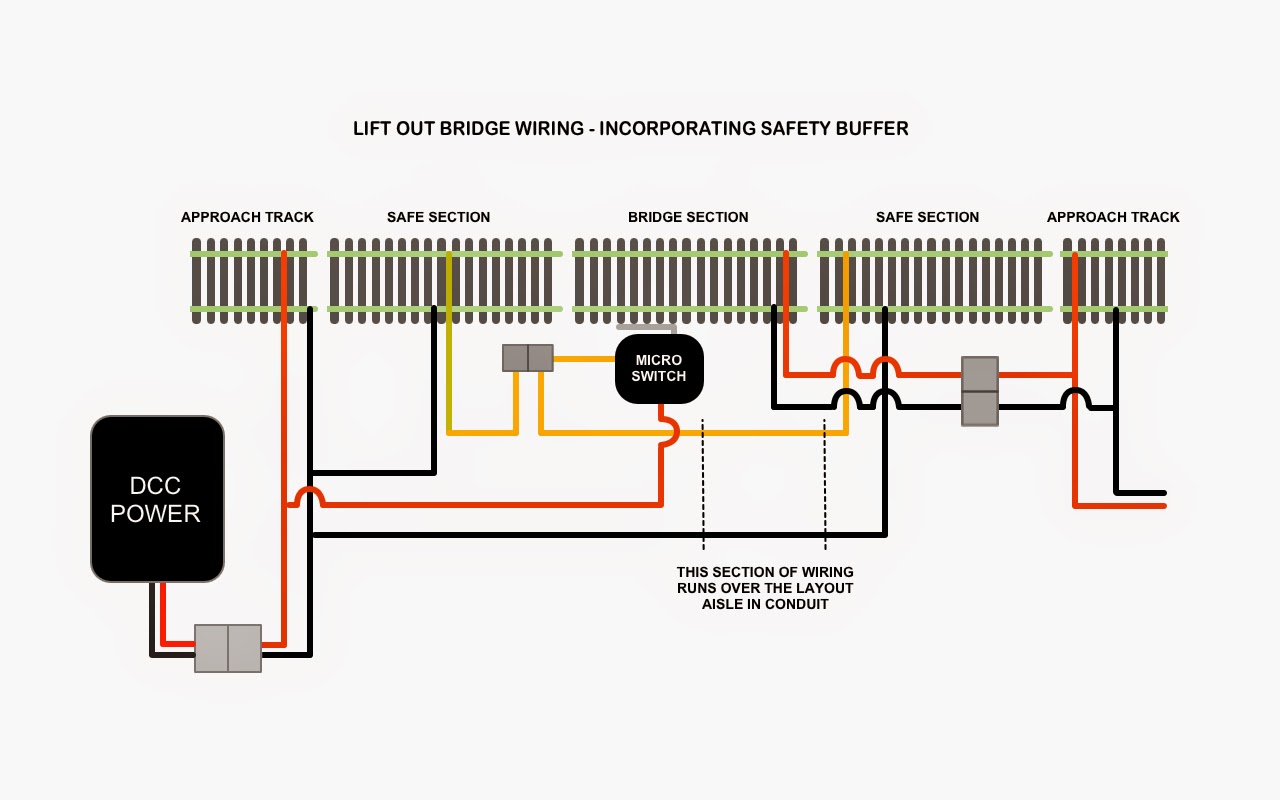 The wiring above allows for a safety buffer zone incorporated into the last section of track before the edge of the fascia.  So when the LOB is removed it deadens the last 2' - 3' (600 - 900mm) of track work, this way even if a locomotive is running at full speed there is no way they can be launched off the layout onto the floor below.
The small micro switch is the key to the whole idea, it basically takes the positive DCC power for from the main bus and routes it through the micro switch and into the two "safety sections" of track work.  When the bridge is removed the switch deactivates and kills the positive power to these two sections. 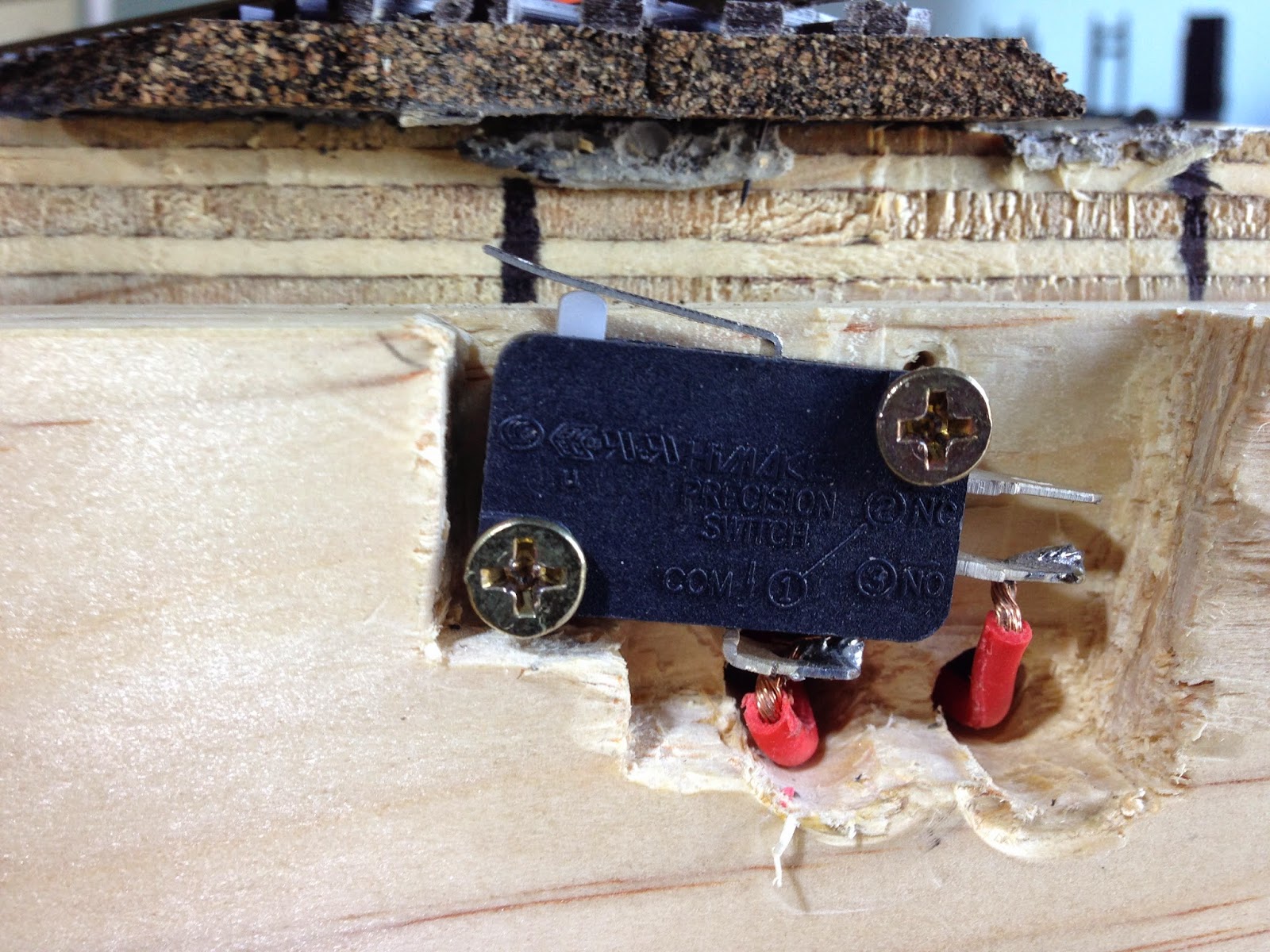 You can see that when the bridge is in place the lever on the switch is pushed down activating the switch and allowing power to travel through to the positive rails on the safety sections.
Here is the positive wire from the DCC Main Bus running to and from the micro switch... 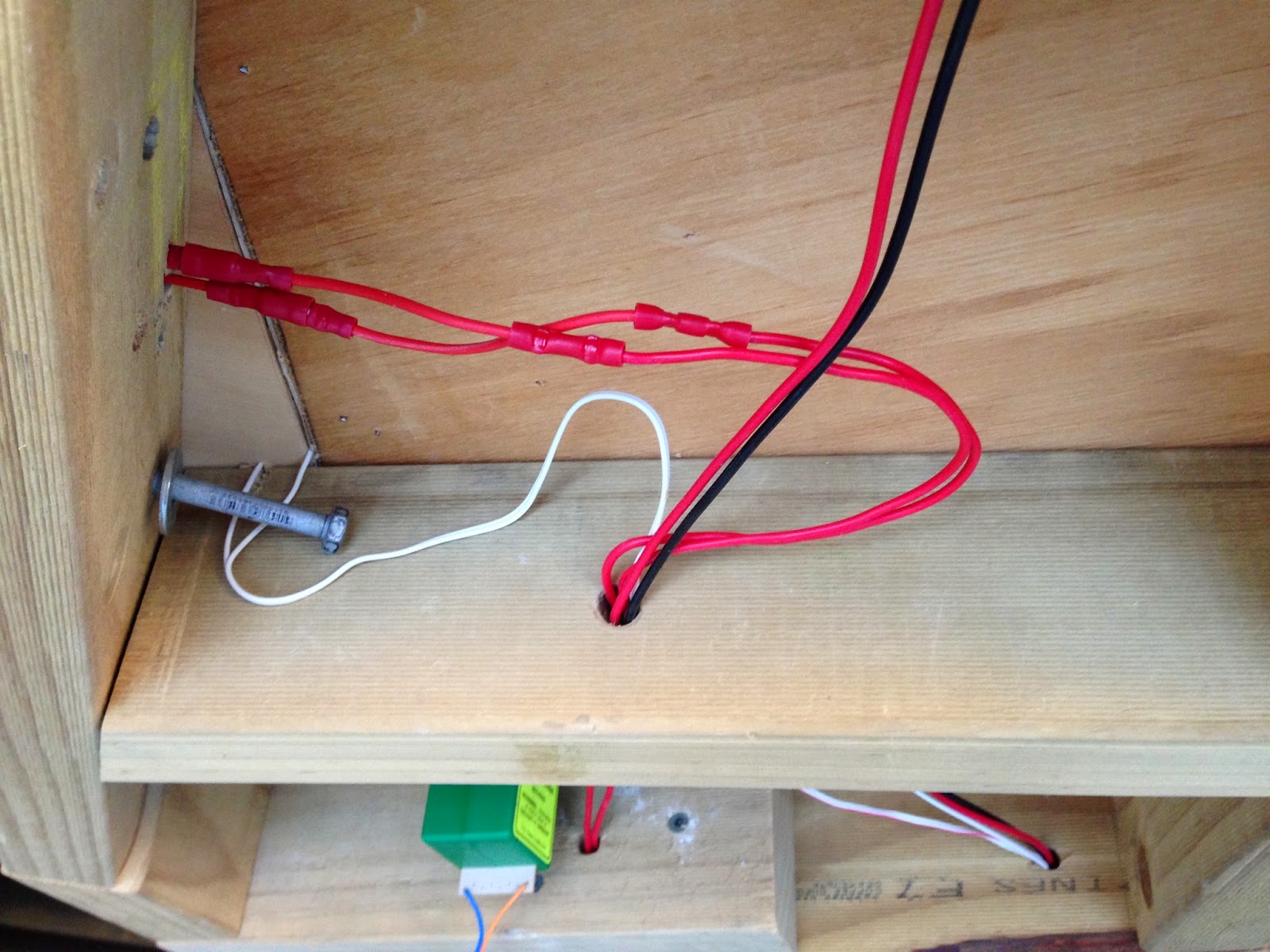 The positive power from the micro switch feeds into a power block that feeds roughly 3' of mainline feeders to the east and also the power to the feeders along the Paper Mill Siding for about a 1'.  This ensures that all the northern approaches are dead if the LOB is removed.

The wiring from here (red & black in the above picture) then runs through a small conduit up and over the main entrance into the layout to the other side were it feeds the opposite side of the bridge
(the safety section only). 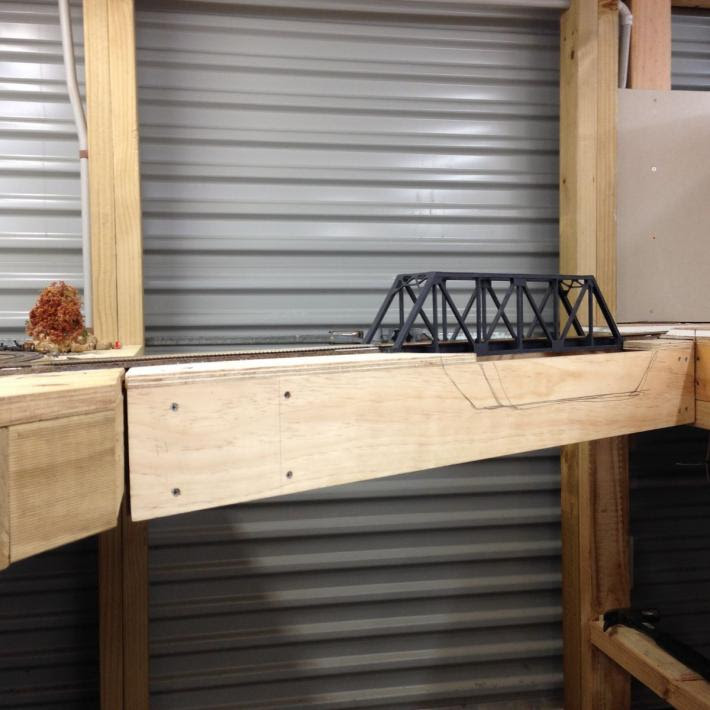 The bridge section itself is independently powered straight from the main track bus, it terminates into a quick release plug so that the bridge can be removed for better access. 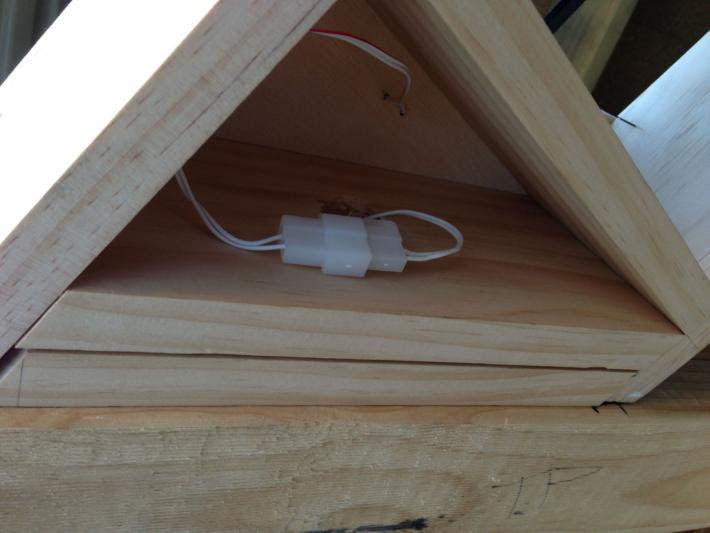 In the above shot you can also see the cleat that supports the bridge (piece of dressed pine against the rough saw) there are two either side and the LOB is screwed down either end.  I prefer screws because they don't really move at all and ensure pretty much perfect alignment of the rail on the track, I will hide these with some small clumps of bushes with a removable piece to access the screw.
So hopefully this helps explain it all, its really quite easy and a very effective method of ensuring that your valuable locomotives and rolling stock don' take that nasty dive off the layout onto the nasty concrete ravine below...
Jas...
Posted by JLandT Railroad at 22:42 No comments: