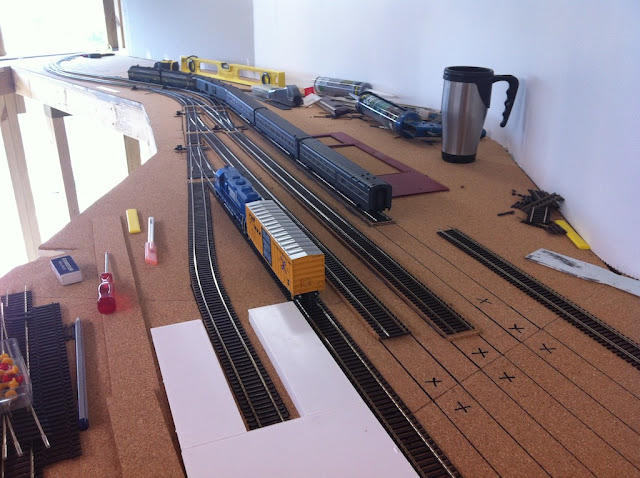 Lots of crossovers & lots of switching... 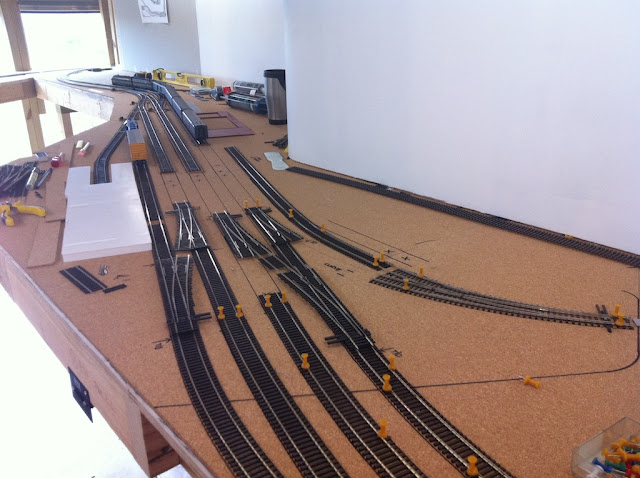 The next section to be laid... 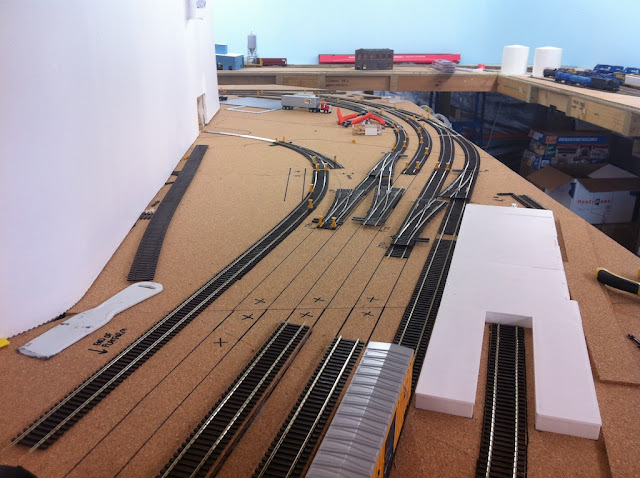 Auto Reversers - Not so hard...

Well this a quick post and a plug for Richard from DCC Concepts in Western Australia, for his great customer service and help with explaining how and where to install the auto reverser on the JL&T.

Basically our trackplan has created a reversing loop that was going to require a dedicated auto reverser,  the problem was I wasn't understanding the concept on where to actually place it, and how they really work.

I had been doing research online to find a suitable reverser and decided on a
DCC Specialities - PSX-AR, these were recommended by several people.  DCC Concepts are dealers in Australia.  So I sent Richard an email this morning and asked for some help on the layout and location of the PSX-AR and within an hour or two he'd replied with two possible solutions and diagrams as well.

After looking at the diagrams I still wasn't 100% sure I had the concept right, so I gave Richard a call to ask a few more questions.  Within a couple of minutes the light had come on and I was set, no more wondering if I had it right, it's all understood and I'll be ordering one next week.

Anyhow for those interested here is the auto reverser block Richard offered as one of the two solutions that we will be using on the JL&T.  This one works perfectly for the layout design as it allows us to keep the outer loop connected as it is presently, it is also longer than "any" train we'll be running on the JL&T.  This design will still allow trains to enter and exit the south staging area, from both east & west too.  The auto reversing block is marked by the red dashes across the track.

For those that are new to the concept and how the auto reverser will work, the power for this entire block will be first routed through the PSX-AR and then fed out to the remaining bus wiring in the AR section.  When a train (the powered locomotives) cross either of the AR block boundaries, this will cause a short and make the AR switch the polarity for the entire section.  The only caveat to this is that only one train or locomotive can cross either boundary at anyone time.

Well in the not to distant future I will hopefully have the mainline on the centre peninsula completed, and it will also be the final section of the top deck mainline to be completed too.

Once this is finished it will mean I will finally be able to start with the scenery phase of the construction, and also start operating the layout and having open ops session. 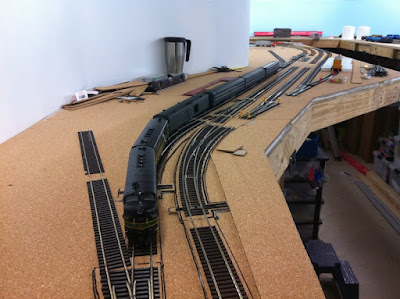 So the passenger terminal & freight terminal have been swapped to accomplish this.  Now I have a passing siding and freight spur on the north side of the mainline. 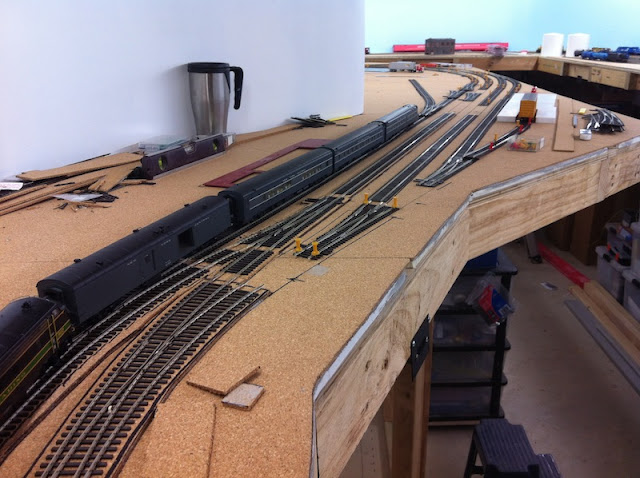 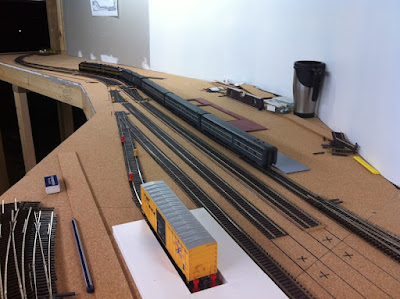 The freight terminal has it's own dedicated two sided unloading dock, and an additional unloading spur on the south side.  I wanted to have both as it adds so much more for operations and switching.  In addition you can see the passing siding next to it (south) and the the mainline.  There will be a crossover between the freight spur and the passing siding to allow movements when cars are spotted at the freight terminal. 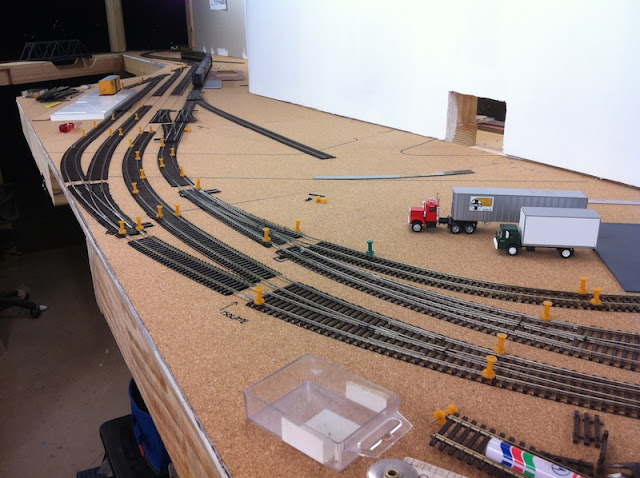 The next section is a series of curved turnouts incorporating Walthers Shinohara & Peco curved turnouts, these range from #8 through to #7.5 and #7 in both brands.  These series of turnouts allows for trains & switches to move between the mainline and the various passing sidings, passenger spur, freight spur whilst the others are occupied. 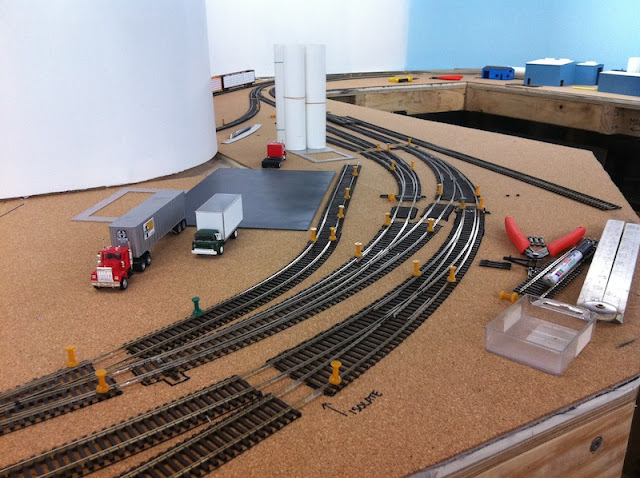 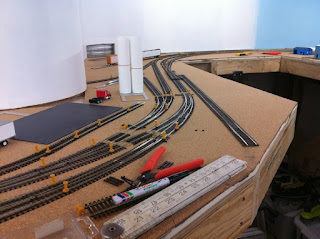 The curved turnouts also serve the food industry that is located on this curve, to date the industry has not been decided but the structure is based around the Walthers Cornerstone "Magic Pan Bakery" kit.  This will be added to via a Pikestuff add on kit to allow for a refrigerated storage & transport area.
This industry will see a wide variety of tank cars, box cars, covered hoppers and refrigerated box cars and is served by two spurs.

The last section will be the timber wholesalers & hardware warehouse, this section has been moved from opposite the freight terminal.  This was due to the limited space available in this location to store to 74' centre beam timber cars.  It also didn't do the industry justice, as I wanted this to be a fairly busy wholesalers.  I want to be able to deliver bulk raw timber loads and also generate outgoing finished timber boxcar loads. 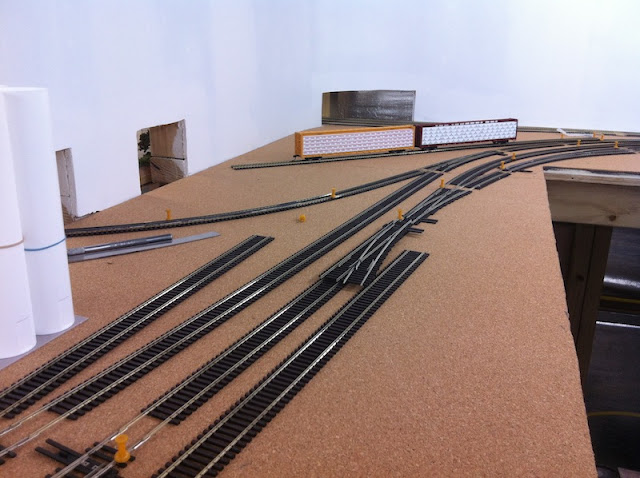 More updates to follow shortly when I finally get the last mainline track in...
Jas...
Posted by JLandT Railroad at 11:08 2 comments:

Here is a quick video of our latest sound installation on our RDG SD45, this has had a GN1000 with twin Soundtraxx Speakers installed.