So this Friday night just gone I had some good friends over to help out with the wiring of the fascia mounted push buttons for the tortoise motors.
Noel & Dennis are both N scale guys but seem to enjoy getting there fix of HO, they both enjoy switching the L&T Branch and are always willing to help out and enjoy a catchup and chat.
So when I installed the LocoNet in the last post I began the process during the week of programming the board ID's into each BDL & SE8C,  this process went reasonablily well until the second last board.  I have 8 x SE8C's and 3 x BDL's (which will expand out to 5) and the second last board wouldn't program.
So Dennis began wiring the Cat6 cable to the push buttons, and Noel and I tackled the issue with the second last board, because Noel has a full Digitrax layout I was hoping to be able to use use his DT400 throttle to directly program the problematic SE8C.  We checked the LocoNet through the JMRI LocoNet monitor and all the other boards and LocoNet was working well and showing good data flow.
I did notice that the return data path for the LocoNet did have to travel the whole way around the layout so I, I re wired it and shortened the path.  But still had the issue with the SE8C, through elimination we actually discovered that the SE8C has a bad pair of RJ6 connectors.  So we took this board out of the LocoNet and the issues were gone, after some extra attention to the terminals and some cleaning we did manage to get the board programmed to it's needed ID#2.
But alas when reinstalled back into the LocoNet the issue came back and the board was hard to get a full read of all Ops switches through JMRI/Pane Pro and it slowed down the LocoNet traffic again.  So it's off to Digitrax with a BDL FOR SOME "goof proof warranty work".
So a very productive night of solving issues, wiring and an enjoyable catch up and chat to see how everyone was and upto.
Jas...
Posted by JLandT Railroad at 10:07 2 comments:

During the last week I managed to get the LocoNet wired up and functioning. 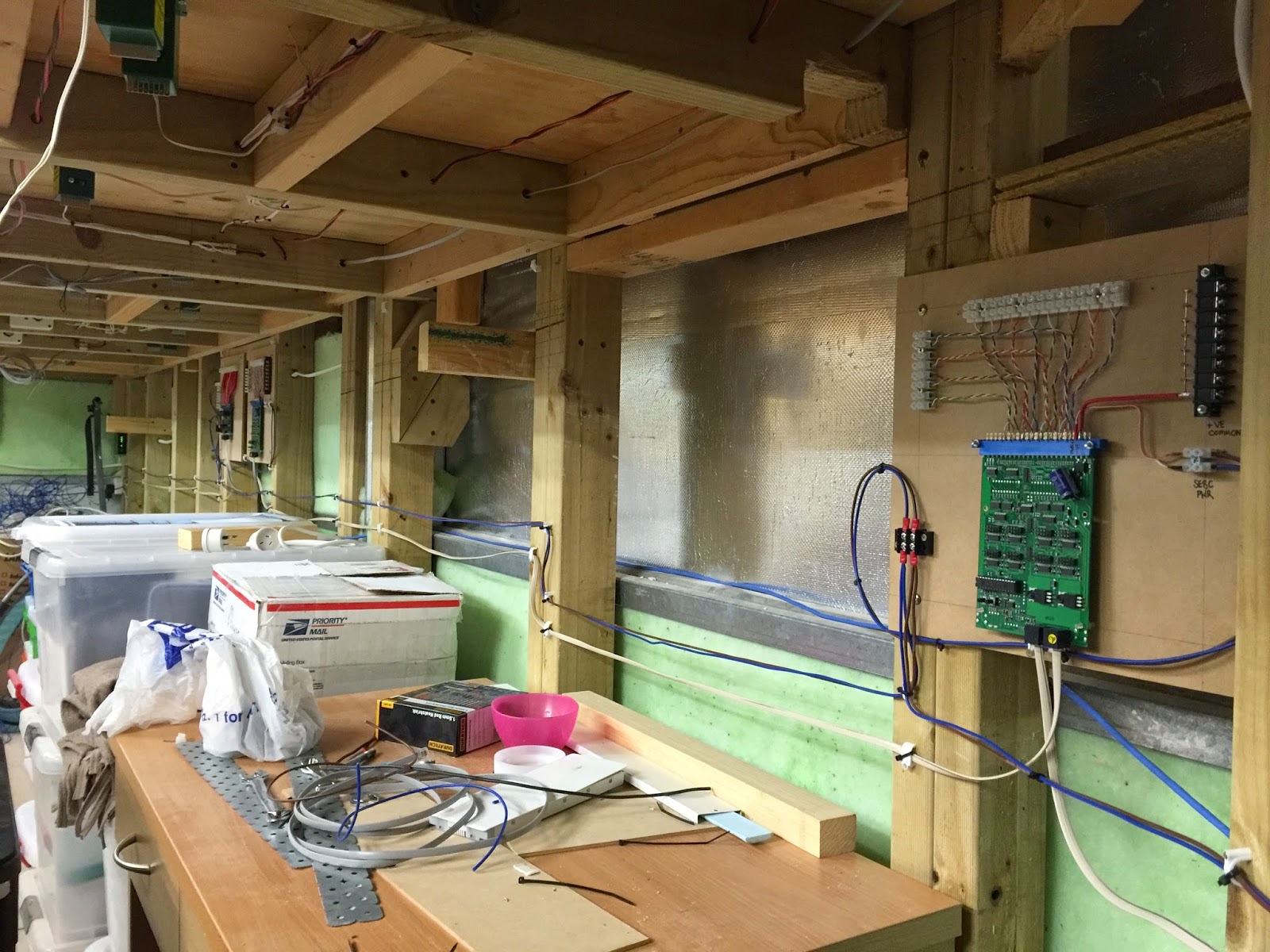 I used 6 core flat phone cable for the LocoNet, which is a very cheap way of making your own cables. 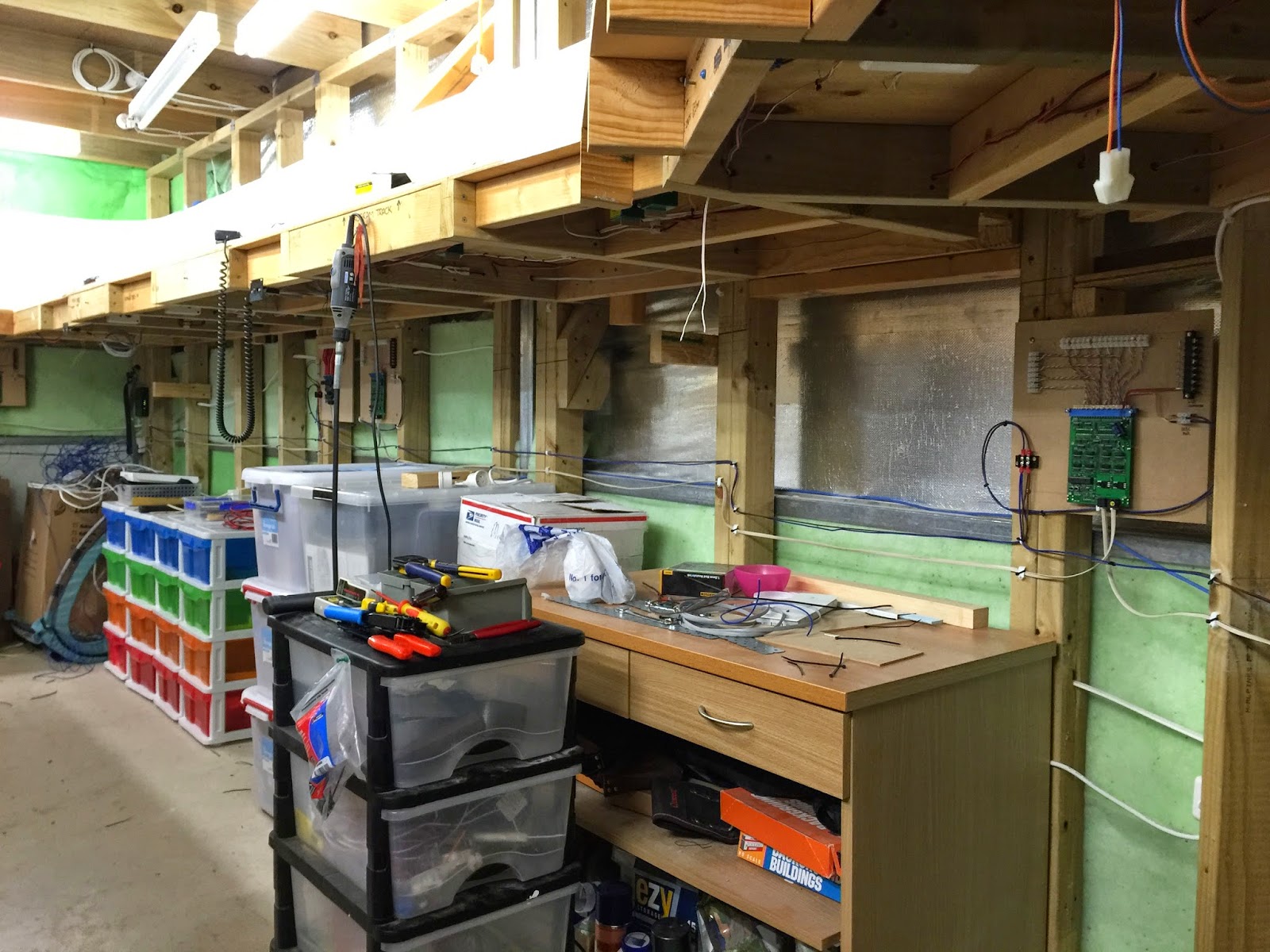 The run starts fro the right of the above photo, and the loops around to the left and then under the centre peninsula. 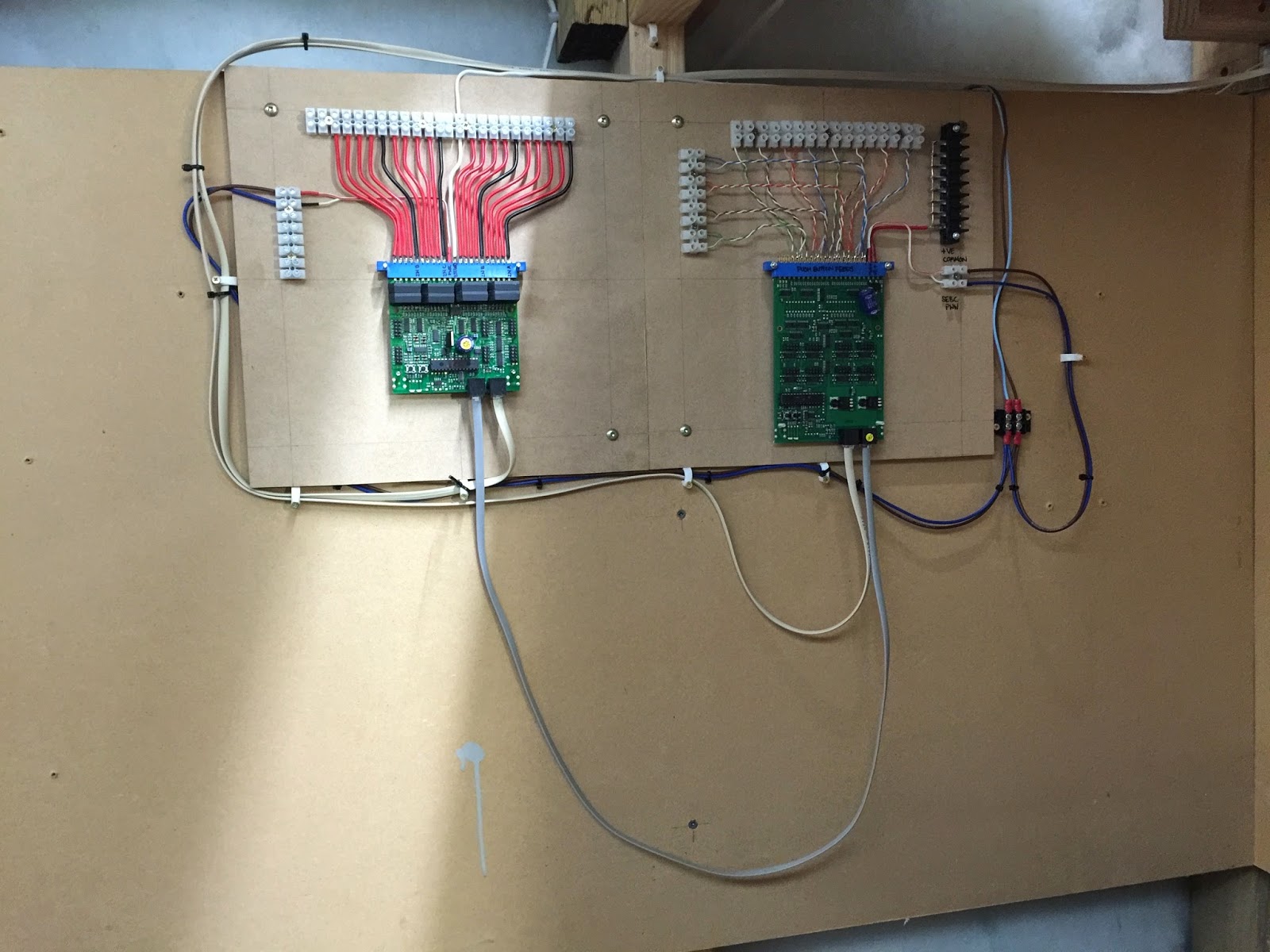 Above is the loop from the north side of the layout through this BDL & SE8C and then back under the centre peninsula.

Next phase is to program all of the board ID's and set up each of them.

Powering it all up... 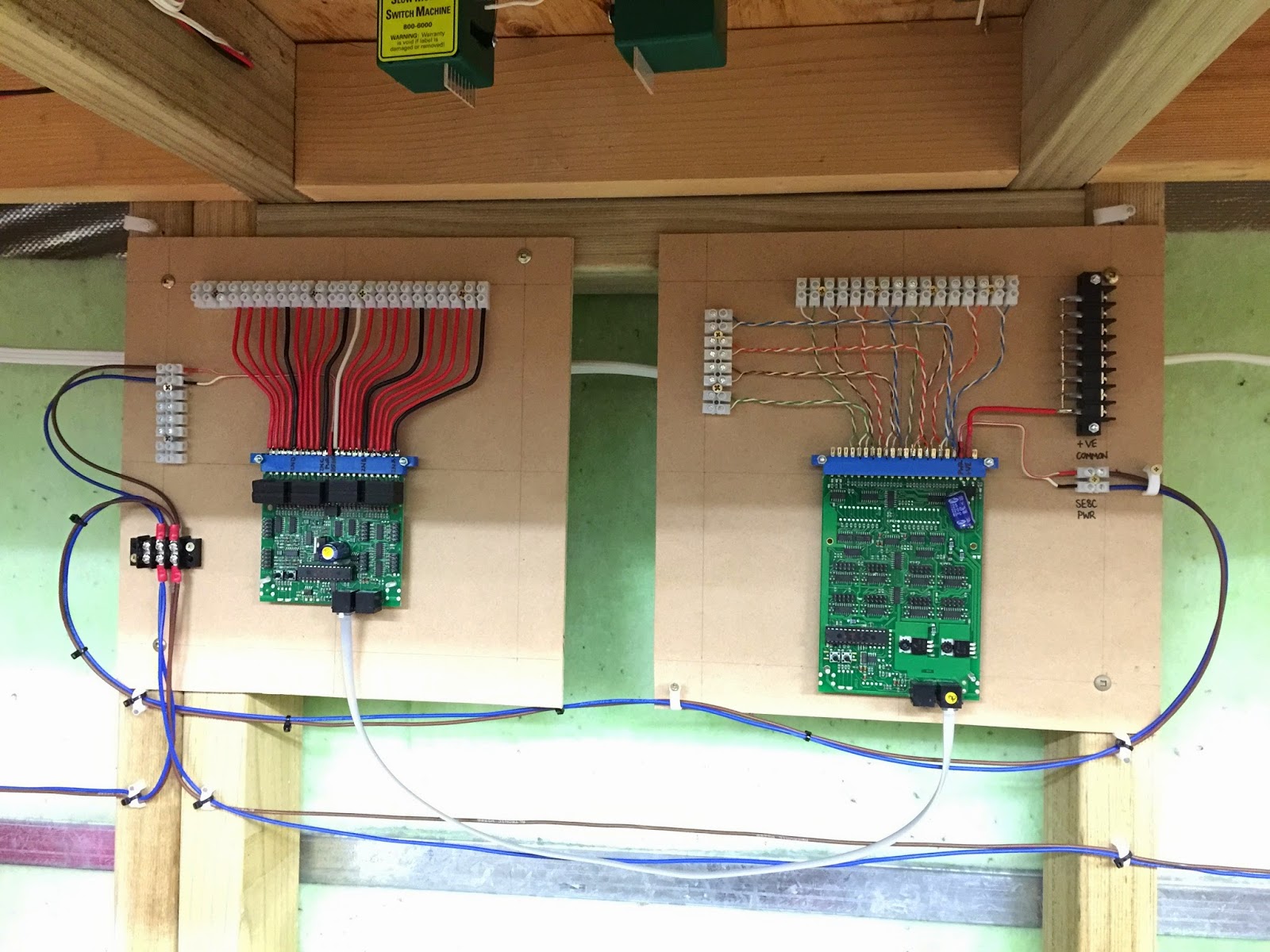 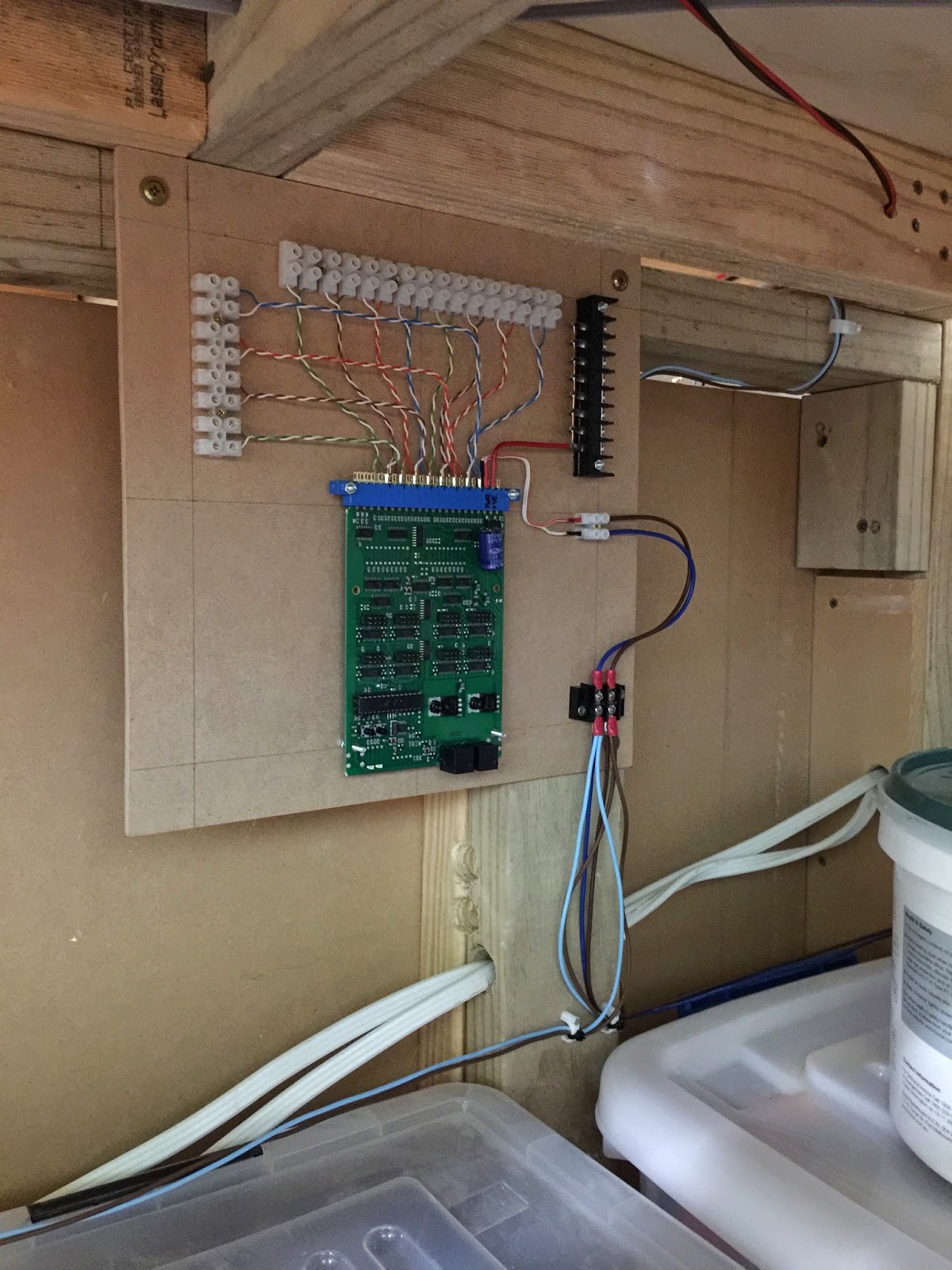 Posted by JLandT Railroad at 08:16 No comments:

Last night I continued on with the wiring for the signaling.  I started installing the accessory bus for the power to the BDL's & SE8C's boards.

This bus is purely for these boards and will have no other devices or electronics running from it.

The colours (blue & brown) are chosen because red & black are being used for the detection circuit power for the BDL's. 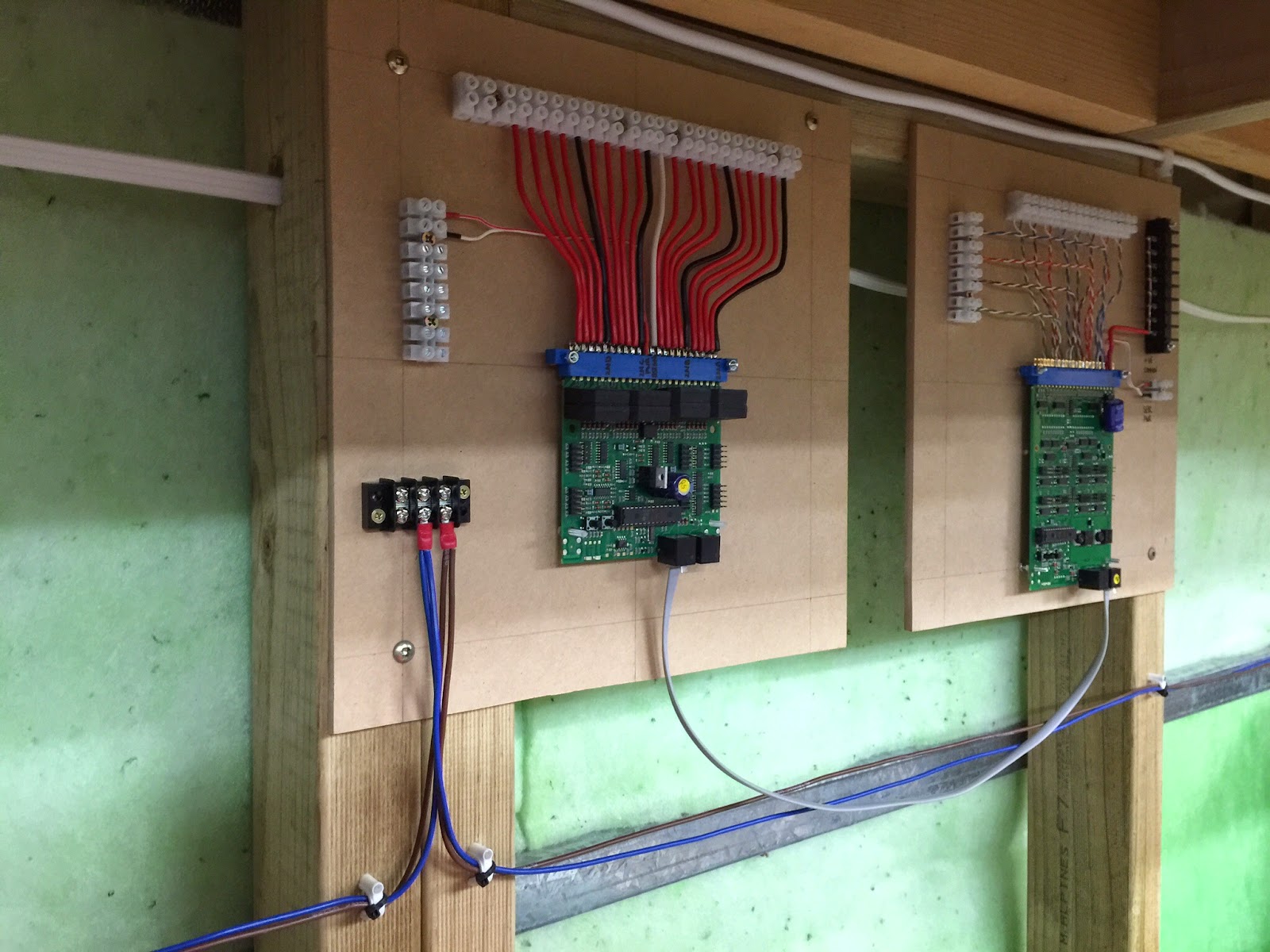 The power bus runs into a terminal feeder and then onto each board. 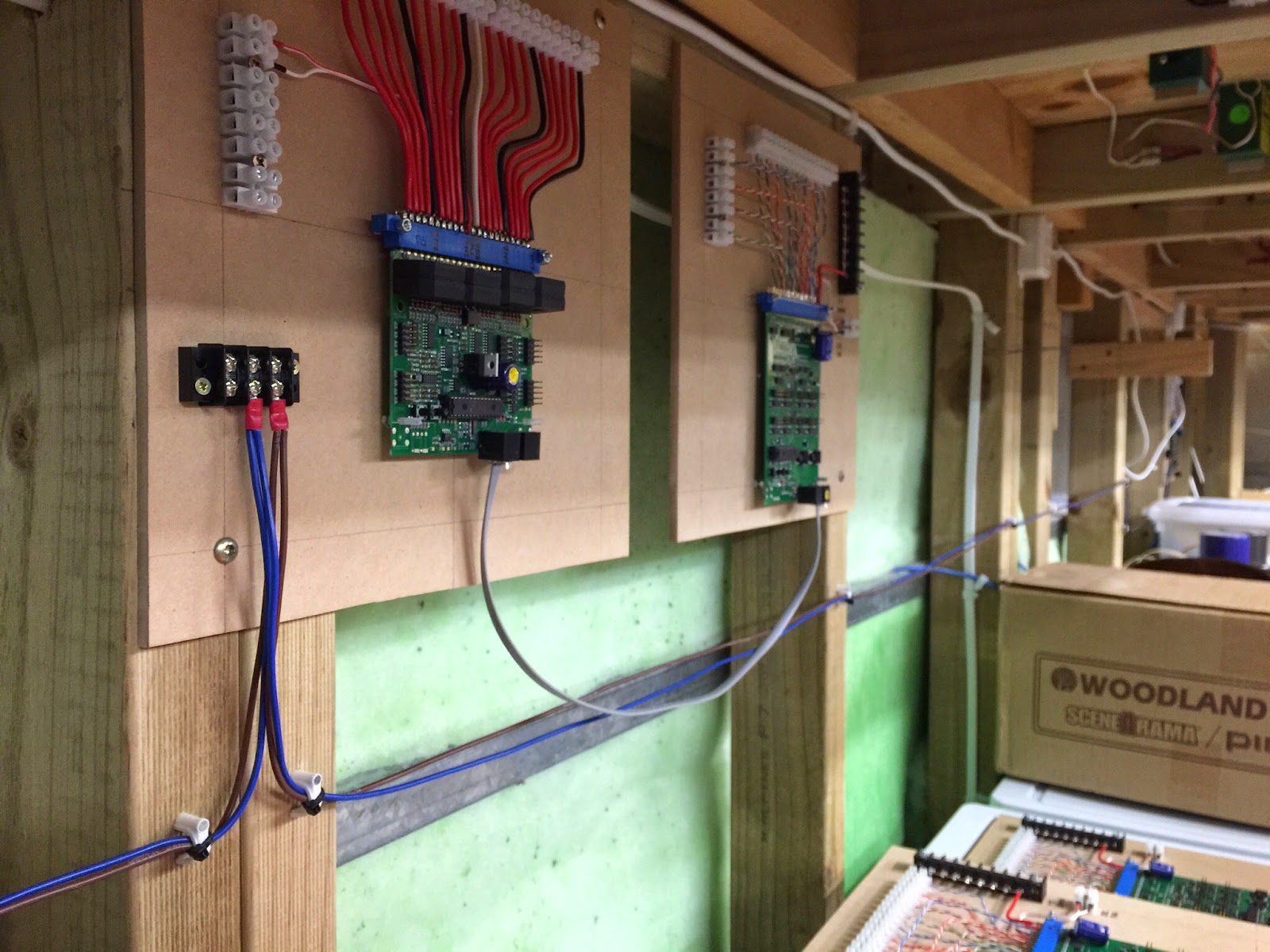 The accessory bus runs along the bottom of the boards as the Tortoise feeders run above the boards and I'm trying to keep power supplies separate from detection circuits.

The accessory bus is powered by a 12V - 2A DC Transformer. 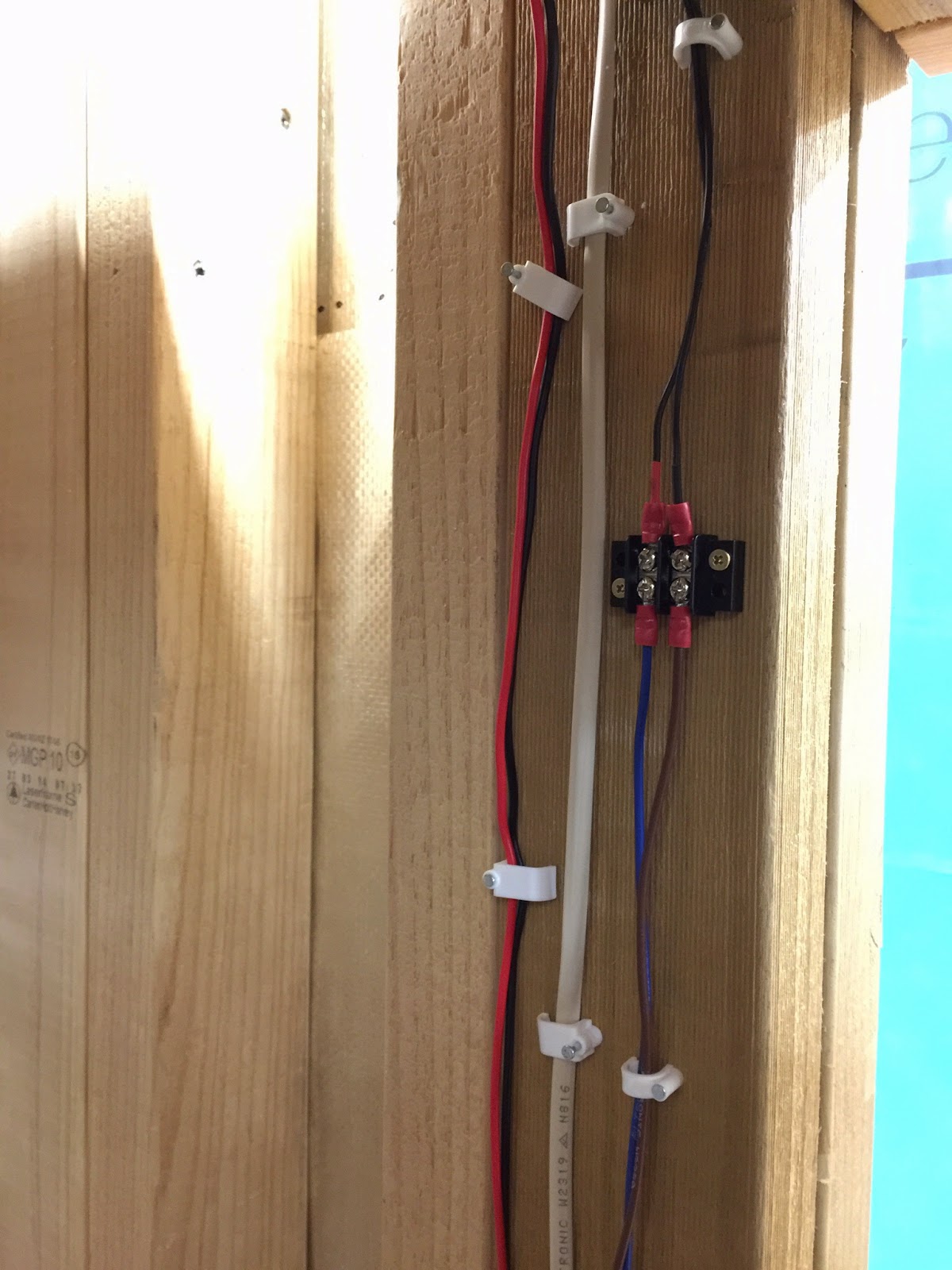 Next phase once the accessory bus is finished is to connect all the boards and then complete the cabling for the LocoNet.

When a server & throttle become your best friends...

So my new found friends are JMRI Web Server & Wi-Throttle, they have saved me a lot of backwards and forwards!

Last night I was continuing on with the installation of more detection blocks and configuring the BDL's & SE8C's.  To accomplish this I was constantly going between the layout area and the dispatchers nook.

I would wire up the detection side to the BDL, connect the LT5 tester run the caboose with resistive wheels sets across the block boundaries and see if the corresponding detection circuit was lit on the tester.

Then it was time to get up, program the block into the JMRI and again go back into he layout put the caboose on the track walk back to layout panel.......  You get the idea, very time consuming!

Then I had an idea, when I was last at Brendan's D&H Layout during an ops session I picked up he was running his JMRI Web Server which my iPhone5 picked up as I was running WiThrottle.  So last night I decided to set up, and get the Web Server running on the JL&T. 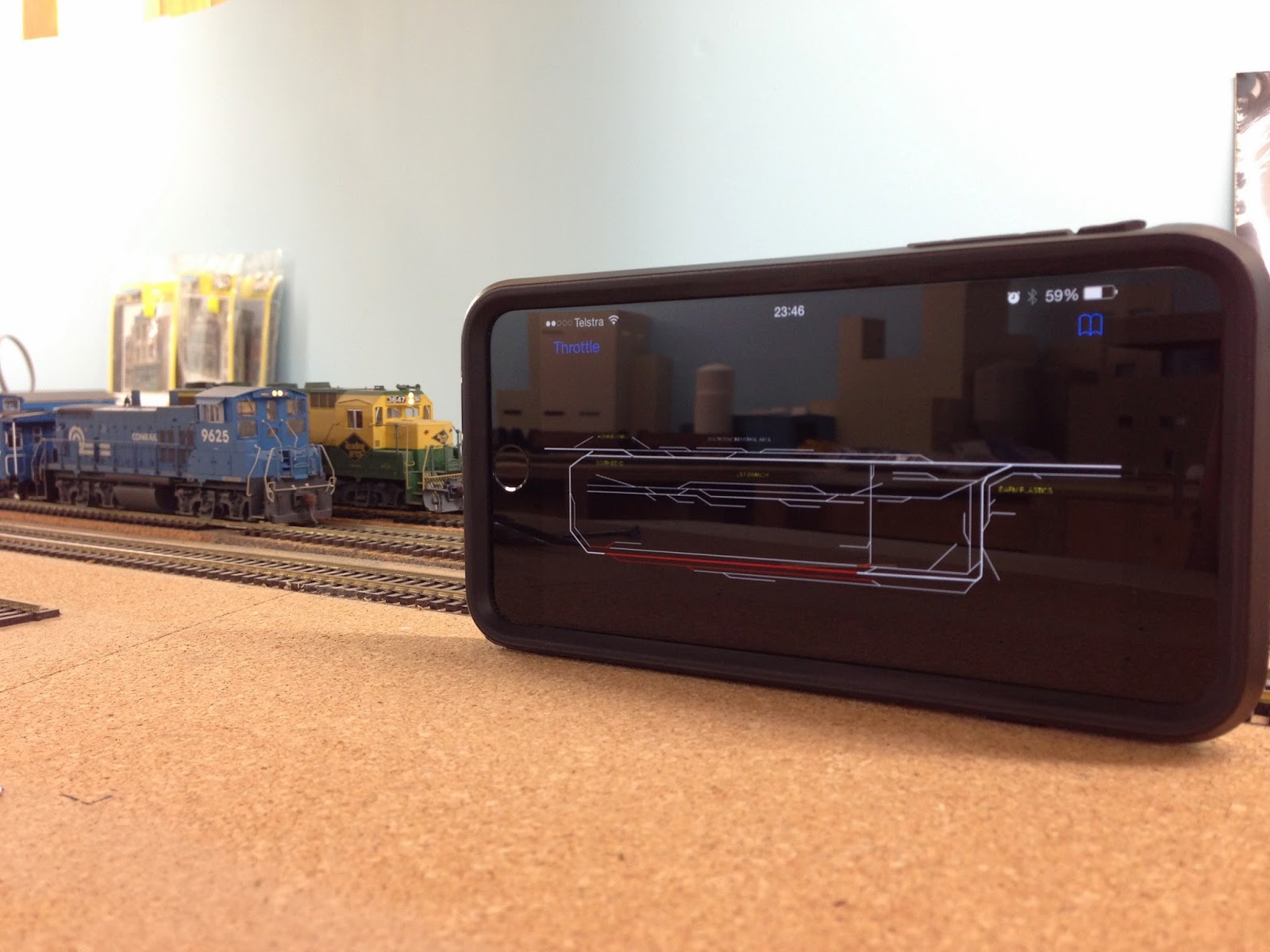 So as you can see the JMRI - Panel Pro / Panel is loaded onto my iPhone6+ (the photo was taken with my iPhone5 which normally has WiThrottle running) and I can see the occupancy of the main and northern passing siding.  I also have direct control over the turnouts too from this screen just like using the bigger version.

This little setup is now saving a fair chunk of time not having to run backwards & forwards between the layout and the dispatcher nook.

Jas.
Posted by JLandT Railroad at 22:35 No comments: